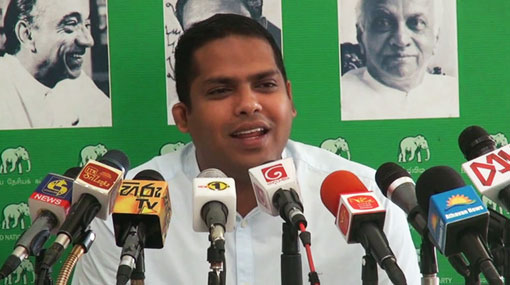 Uva Province Chief Minister Harin Fernando says that the recent resignation of four SLFP Ministers was a “planned game” and that he expects more will follow suit.

He stated that on the very same day UPFA MP Vasudeva Nanayakkara had used foul language against Prime Minister Ranil Wickremesinghe in Parliament, in an attempt to tarnish latter’s image and show to the people that no one respects him as PM.

Fernando said that with the quitting of several Ministers and the use of filth against the Prime Minister, a section of the opposition is attempting create a “new wave” ahead of the General Election in a brazen attempt to falsely depict their rise and the government’s fall.

“These are all controlled from the Abhayaramaya using a remote control,” he claimed, in an apparent reference to the Sri Abhayaramaya Buddhist Temple in Narahenpita, which is frequently visited by former President Mahinda Rajapaksa.

He also alleged that the four Ministers, who announced their decision to resign on May 21, did so after consulting astrologers as it was six months to the date President Maithripala Sirisena left the SLFP to contest the Presidential Election.

“Because Dilan Perera and them are also following wrong astrologers, their decision will backfire on them,” Fernando told reporters in Colombo today.

Deputy Minister of Highways and investment Promotion, Eran Wickramaratne, who also addressed the media briefing, said that a disciplinary system must be introduced for Members of Parliament (MPs) immediately.

TAGS :  Harin Fernando ,  Ranil Wickremesinghe ,  Vasudeva Nanayakkara ,  Abhayaramaya ,  Mahinda Rajapaksa ,  Eran Wickramaratne ,
Disclaimer: All the comments will be moderated by the AD editorial. Abstain from posting comments that are obscene, defamatory or slanderous. Please avoid outside hyperlinks inside the comment and avoid typing all capitalized comments. Help us delete comments that do not follow these guidelines by flagging them(mouse over a comment and click the flag icon on the right side). Do use these forums to voice your opinions and create healthy discourse.