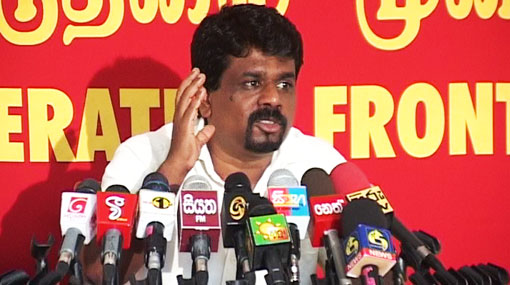 The Janatha Vimukthi Peramuna (JVP) says that it would no longer participate in the National Executive Council.

Speaking at an event in Anuradhapura, JVP leader MP Anura Kumara Dissanayake said that the national executive council has not convened since April 19.

The National Executive Council was set up, inclusive of representatives of parties represented in Parliament as well as Civil Society organizations, to strengthen democracy following the victory of Maithripala Sirisena at the Presidential polls in January.

The council had discussed the necessary reforms proposed in Sri Lankan President’s 100-day plan and how best to implement them during its previous sessions.

TAGS :  JVP ,  National Executive Council ,  Anura Kumara Dissanayake ,  Maithripala Sirisena ,
Disclaimer: All the comments will be moderated by the AD editorial. Abstain from posting comments that are obscene, defamatory or slanderous. Please avoid outside hyperlinks inside the comment and avoid typing all capitalized comments. Help us delete comments that do not follow these guidelines by flagging them(mouse over a comment and click the flag icon on the right side). Do use these forums to voice your opinions and create healthy discourse.