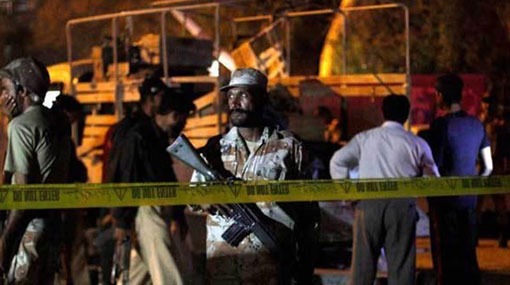 Pakistan on Saturday confirmed that a blast that claimed two lives near a cricket stadium on Friday where a ODI match was underway was a suicide attack.

Pakistan Information and Broadcasting Minister Pervaiz Rashid, while talking to a local news channel, said an attempt to attack the Gaddafi Stadium in Lahore when a Pakistan-Zimbabwe one-day International match was unbder way was foiled by the gallantry of a police officer, who lost his life while trying to stop the attacker near Kalma Chowk, reports Dawn.

The minister praised the actions of Pakistan Broadcasters Association for “covering up” the news while the cricket match was going on so as not to spread panic as the stadium was filled with 20,000 spectators at the time of incident.

Earlier, Pakistani media reported an explosion close to Gaddafi stadium but reports were taken off air after it was claimed that it was an an electricity transformer blast.

Later, the provincial police’s inspector general of operations, while addressing a press briefing said two people -- Sub-Inspector Abdul Majeed and a civilian Rizwan -- were killed in the blast.

But the senior police official claimed that the blast happened inside a rickshaw and forensic samples were collected from the site to determine the nature of the explosion.

The attack has raised questions about whether the tour by Zimbabwe, the first by an international side since the Sri Lankan team was attacked by terrorists in Lahore in 2009, would continue.

The blast occurred at 9 p.m. when the day-night match between Pakistan and Zimbabwe was underway. The 50-over match continued uninterrupted and was won by Pakistan.

TAGS :  Pakistan ,  Gadaffi Stadium ,  2009 Lahore attack ,  PCB ,
Disclaimer: All the comments will be moderated by the AD editorial. Abstain from posting comments that are obscene, defamatory or slanderous. Please avoid outside hyperlinks inside the comment and avoid typing all capitalized comments. Help us delete comments that do not follow these guidelines by flagging them(mouse over a comment and click the flag icon on the right side). Do use these forums to voice your opinions and create healthy discourse.