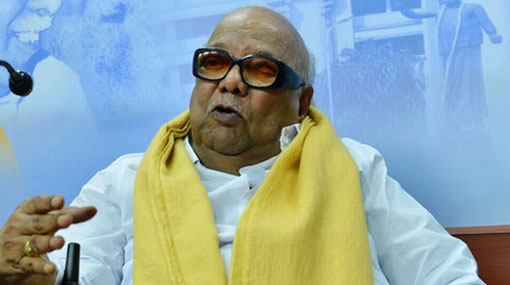 Expressing concern over a report on the Sri Lankan army’s “continued occupation” of traditional Tamil homeland, DMK on Saturday said it showed that the scene has not changed despite a change of guard in the island republic.

Party chief M Karunanidhi said President Maithiripala Sirisena had won the elections with the support of ethnic Tamils, who had been promised demilitarisation of Tamil-dominated areas.

However, the traditional Tamil homeland is still under heavy military occupation by 1.6 lakh soldiers, mostly Sinhalese, he said referring to the report by California-based Oakland Institute.

“The report of the Oakland Institute shows that injustice against Tamils has not reduced despite a new President. The rule changed there, but did the scene?” he asked.

Quoting the report, Karunanidhi alleged, “The Lankan army was engaged in large-scale property development, running luxury tourist resorts and business ventures on land seized from local populace, even as Tamil culture and history was being suppressed by a government-led effort to construct victory monuments and Buddhist shrines.”

In a statement, Karunanidhi recalled that he had written to Prime Minister Narendra Modi in February this year after Sirisena took over, explaining the need for India’s intervention in ensuring the rights of minority Tamils and reiterated his demand.

TAGS :  DMK ,  M Karunanidhi ,  Tamil Nadu ,  Maithiripala Sirisena ,  Oakland Institute ,  Sri Lankan Tamils ,
Disclaimer: All the comments will be moderated by the AD editorial. Abstain from posting comments that are obscene, defamatory or slanderous. Please avoid outside hyperlinks inside the comment and avoid typing all capitalized comments. Help us delete comments that do not follow these guidelines by flagging them(mouse over a comment and click the flag icon on the right side). Do use these forums to voice your opinions and create healthy discourse.