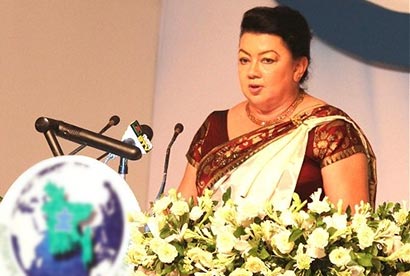 Former first lady Shiranthi Rajapaksa on Monday (1) issuing a statement responded to allegations leveled against her in connection with several bank account transactions.

The statement said, “Mrs. Shiranthi Rajapaksa gave a statement to the FCID this morning to assist in an investigation concerning ‘SiriliyaSaviya’ an NGO run by her. The FCID was informed that SiriliyaSaviya is a charity, an NGO registered with the National Secretariat for Non GovernmentalOrganisations  and is financed by local and foreign donations.

Mrs. Rajapaksa also stressed that no state funds were utilised in running this organisation. The Carlton SuwaUdanaProgramme is a part of SiriliyaSaviya and was started with the aim of building a children’s hospital with residential facilities for the mothers who look after their sick children.

A fund was being raised for this purpose. Mrs. Rajapaksa also said in her statement that owing to the freezing of the Siriliya Saviya bank account, she has come to know that three patients who had been receiving financial assistance from the organisation had died.

Political opponents of the Rajapaksa government have alleged that the three individuals including Mrs. ShiranthiRajapaksa, authorised to sign cheques on behalf of Siriliya Saviya had provided ‘false’ national identity card numbers to the People’s Bank Suduwella Branch. When the bank account was first opened by officials of the organisation a copy of Mrs. Shiranthi Rajapaksa’s passport was given to the bank and the other two signatories MrsK. H.A.N.JeewaniKumari and Mrs S.K.K.Dissanayake, provided copies of their national identity cards to the bank.

The names and addresses of all three signatories in the bank’s system are correct but an error has obviously been made in entering the identity card numbers into the computer system. Cheques issued by Siriliya Saviya were not signed by non-existent persons. All three authorised signatories are real people who still serve the organization.”