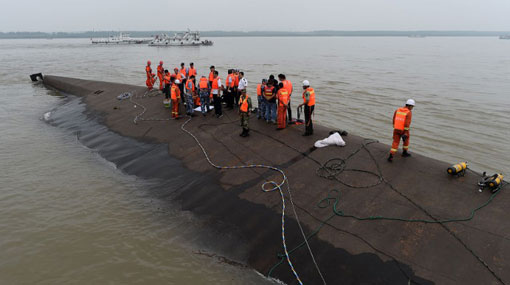 The Sri Lankan Government today expressed condolences to the Government and the people of China on the tragic incident of the capsizing of a cruise ship in the Yangtze River in the Hubei Province, where many people are feared to have drowned, with hundreds still missing.

The thoughts and prayers of the people of Sri Lanka are with the families of those who have lost their loved ones in this tragedy, the Ministry of Foreign Affairs said.

“It is hoped that the search and rescue efforts will succeed in saving those who are still missing.”

As of midday Wednesday, with heavy rain falling, only 14 people were known to have survived the accident; 430 others who had been aboard the Oriental Star were unaccounted for.

Twelve people had been confirmed dead, according to the official Xinhua news agency, and many hundreds were probably still inside the vessel. Mr. Chen, the military commander, said that more people might still be alive in the ship and that additional rescuers were on their way to the scene, in Jianli County of Hubei Province.

The ship keeled over Monday night local time in severe weather that the captain and engineer described to investigators as a tornado, state news media reports said.

TAGS :  China ,  Yangtze River ,  capsize ,  Hubei Province ,  cruise ship ,
Disclaimer: All the comments will be moderated by the AD editorial. Abstain from posting comments that are obscene, defamatory or slanderous. Please avoid outside hyperlinks inside the comment and avoid typing all capitalized comments. Help us delete comments that do not follow these guidelines by flagging them(mouse over a comment and click the flag icon on the right side). Do use these forums to voice your opinions and create healthy discourse.

Protests staged in many areas today

Protests staged in many areas today