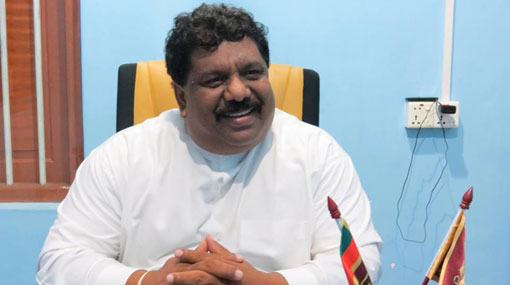 The court instructed authorities to impound the passport of the Southern Province Fisheries Minister, who is being investigated over controversial comments made by him regarding the Financial Crime Investigation Division (FCID).

The Criminal Investigations Department (CID) today reported to the court regarding the ongoing investigation.

The Colombo Chief Magistrate also instructed the CID to obtain video and audio tapes containing the statement from media organizations.

In a public speech recently delivered at Tissamaharama, he warned that officials of the FCID must be stoned to death for carrying out investigations against members of the Rajapaksa regime.

“We will watch them being stoned to death when Mahinda Rajapaksa returned as Prime Minister,” Upul had said.

Upul warned the FCID officials that “they will be dealt with.”

Sri Lanka Police announced that investigations would be carried out regarding the statement as it was a threat to the police unit and the officers serving in it.

Police spokesman Ruwan Gunasekera said: “His (Upul’s) comments were of an inciting nature. He can be charged under penal code for inciting violence against public officials.”

He will be questioned and a statement will be recorded, Gunasekera said.

Upul had made the remarks during a public protest against FCID for summoning former first lady Shiranthi Rajapaksa over alleged corruption in an NGO she ran during her husband’s presidency.

TAGS :  DV Upul ,  FCID ,  Colombo Chief Magistrate ,  CID ,  Tissamaharama ,
Disclaimer: All the comments will be moderated by the AD editorial. Abstain from posting comments that are obscene, defamatory or slanderous. Please avoid outside hyperlinks inside the comment and avoid typing all capitalized comments. Help us delete comments that do not follow these guidelines by flagging them(mouse over a comment and click the flag icon on the right side). Do use these forums to voice your opinions and create healthy discourse.