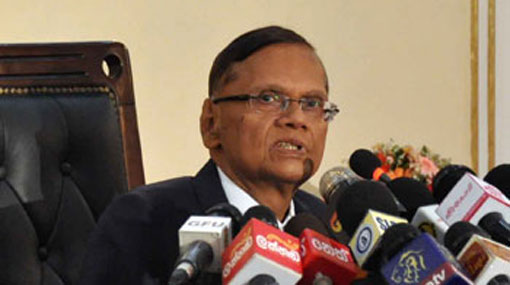 Sri Lanka’s opposition parties want the installation of a government which has majority support in parliament and not its dissolution and fresh elections.

This was told to the Foreign Correspondents’ Association (FCA) on Friday, by three top leaders of the United Peoples’ Freedom Alliance (UPFA) which has majority support in parliament.

At present, the United National Party (UNP), which holds the reins of power, has less than 45 members in a House of 225, while the UPFA has more than 113.

President Maithripala Sirisena had called upon the UNP to form the government after he was elected on January 8, only because he had been in alliance with that party in the Presidential election.

G.L. Peiris, who along with Dullas Alahapperuma and Dinesh Gunawardene, spoke to the FCA, said that a minority government will not be able to get laws passed or bring about constitutional changes like the 20 th Amendment (20A) to bring about vital electoral reforms.

“These are best done by a government enjoying majority support in parliament and the UPFA has the majority to form a stable, functioning government,” Peiris argued.

Reasons for No Trust Motion

Explaining the reasons for moving a No Confidence Motion against Prime Minister Ranil Wickremesinghe, Peiris said that if the motion is carried, as it will surely be because it had been signed by 112 MPs out of 225, the Prime Minister and his cabinet will have to resign. When that happens, President Sirisena will have to call upon a person who, in his opinion, has majority support in parliament, to form an alternative government. He can order dissolution of parliament only after that option has been exhausted, Peiris said.

The No Trust Motion is meant to enable the formation of an alternative viable government based on majority support in parliament and not to secure the dissolution of parliament, he clarified.

Asked if a UPFA government will be able to work with President Sirisena when the UPFA will be having a strong pro-Mahinda Rajapaksa lobby in it, Peiris said: “We will have to work with him.”

Cohabitation is deemed possible because President Sirisena is also Chairman of the SLFP and a titular leader of the UPFA. And Rajapaksa is a Patron of the SLFP.

TAGS :  Maithripala Sirisena ,  UPFA ,  UNP ,  FCA ,  SLFP ,  GL Peiris ,  Dullas Alahapperuma ,
Disclaimer: All the comments will be moderated by the AD editorial. Abstain from posting comments that are obscene, defamatory or slanderous. Please avoid outside hyperlinks inside the comment and avoid typing all capitalized comments. Help us delete comments that do not follow these guidelines by flagging them(mouse over a comment and click the flag icon on the right side). Do use these forums to voice your opinions and create healthy discourse.