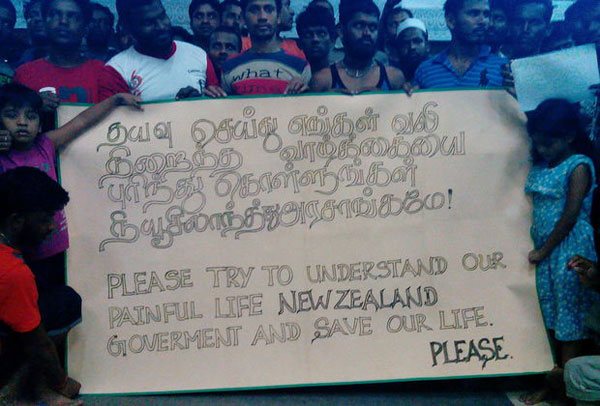 The Australian government has denied claims that customs officials paid thousands of dollars to people smugglers to take asylum seekers back to Indonesia.

A boat carrying 65 asylum seekers crashed onto a reef near the remote Rote Island, off West Papua, last week and those on board said Australian authorities had turned them back.

One of those on board told Radio New Zealand maritime authorities spent several hours talking to the boat’s captain and crew, after which the captain was seen putting Australian money into his pocket.

Speaking from Kupang, Indonesia, Nazmul Hassan, told Morning Report on Monday at least $A7200 was paid to the captain and crew for each passenger. Mr Hassan said Indonesian authorities later confiscated much of that money.

A Sri Lankan asylum seeker called Kajuran told ABC News a similar story, but the broadcaster said the claim was difficult to understand or verify.

And an Indonesian police official told Fairfax media he saw bundles of cash allegedly paid by Australian officials to the crew.

The Sydney Morning Herald reported the boat was intercepted by Australian navy and Customs officials in late May, and passengers were then returned to the island of Rote.

The local police chief on the island, Hidayat, alleges the six crew members were given $5000 each by Australian custom officials.

He said he saw the money, wrapped in six black plastic bags, when the crew was apprehended for their people-smuggling operation.

TAGS :  Sri Lankan refugees ,  Indonesia ,  New Zealand ,  West Papua ,  Australia ,
Disclaimer: All the comments will be moderated by the AD editorial. Abstain from posting comments that are obscene, defamatory or slanderous. Please avoid outside hyperlinks inside the comment and avoid typing all capitalized comments. Help us delete comments that do not follow these guidelines by flagging them(mouse over a comment and click the flag icon on the right side). Do use these forums to voice your opinions and create healthy discourse.