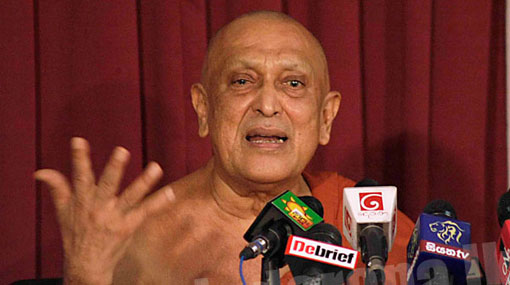 A woman’s group says that Venerable Maduluwawe Sobitha Thero, chief incumbent of the Kotte Naga Vihara, should be held accountable for the current predicament which has befallen the country.

‘Women for Justice,’ an organisation of Sri Lankan women professionals in a letter addressed to the Buddhist leader, says that a majority of current occurrences are have an adverse effect on the country as well as the people and though Sobitha Thero remains silent on these matters he should take responsibility for them.

The group also questions the silence of Ven. Maduluwawe Sobitha Thero, who is the leaders of the the National Movement for a Just Society, with regarding to incident which it claims are a threat to the country.

TAGS :  Women for Justice ,  Maduluwawe Sobitha Thero ,
Disclaimer: All the comments will be moderated by the AD editorial. Abstain from posting comments that are obscene, defamatory or slanderous. Please avoid outside hyperlinks inside the comment and avoid typing all capitalized comments. Help us delete comments that do not follow these guidelines by flagging them(mouse over a comment and click the flag icon on the right side). Do use these forums to voice your opinions and create healthy discourse.