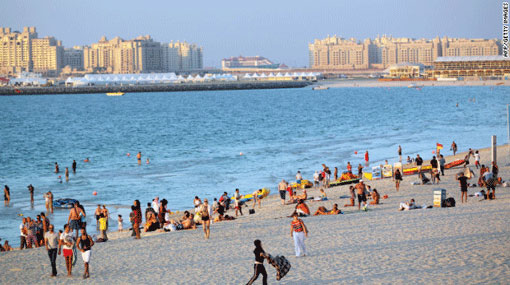 A Sri Lankan man faced a court in the United Arab Emirates Thursday for allegedly inappropriately kissing a three-year-old boy at a beachside in Jumeirah last April.

But the Sri Lankan, 49, entered a not guilty plea before the Dubai Court of First Instance, claiming he was drunk at the time and could not remember what happened.

“I am not guilty... I do not remember because I was drunk on the day when the incident happened,” he told presiding judge Ezzat Abdul Lat when the judge asked him.

A separate report on Khaleej Times said the Sri Lankan was charged with molestation in the Court of First Instance over the incident last April 1.

Khaleej Times added a verdict is expected on July 9.

The Filipina babysitter, 40, told prosecutors the incident occurred while she was accompanying her sponsor’s child.

She said the suspect approached them and asked the boy “how are you?”

“When he spoke, a stinky smell of liquor came out from him. Obviously he was drunk. Then he asked the boy to go to him and when the boy did, the suspect kissed him on his lips,” she said.

She said she was irritated by his “unacceptable behavior” and asked him why he kissed the boy.

“(H)e cursed me and cursed Filipinos. Thereafter I called the police and when the came, I told them that the kiss was an indecent one,” she said.

Another Filipina helper who was present at the time added the suspect “sat in front of the boy, who was playing with the sand.”

“(H)e kissed the boy on his lips. He also gave the boy a flower,” the helper said.

A policeman told prosecutors the incident happened at the open beachside of Jumeirah 1 and said the suspect insisted he kissed the boy “in an innocent manner” and claimed that he “did not mean any harm.” — GMA News

TAGS :  UAE ,  Jumeirah ,  Sri Lankan expat ,
Disclaimer: All the comments will be moderated by the AD editorial. Abstain from posting comments that are obscene, defamatory or slanderous. Please avoid outside hyperlinks inside the comment and avoid typing all capitalized comments. Help us delete comments that do not follow these guidelines by flagging them(mouse over a comment and click the flag icon on the right side). Do use these forums to voice your opinions and create healthy discourse.