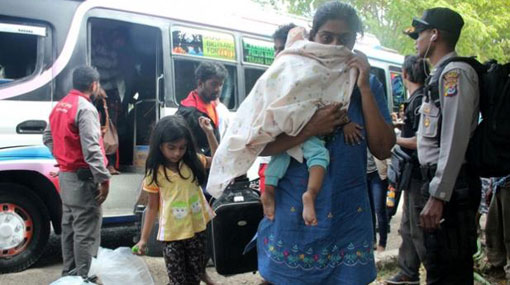 Indonesia’s foreign minister on Saturday demanded answers from Canberra over claims that Australian officials paid thousands of dollars to turn a boat back to Indonesia after Prime Minister Tony Abbott refused to deny the allegations.

Foreign Minister Retno Marsudi said Indonesia would be “really concerned” if it was confirmed that the captain and five crew of a boat carrying asylum-seekers were each paid US$5,000 by an Australian immigration official to return to the Southeast Asian country.

The claims were made to local police on Rote island in eastern Indonesia, where the boat carrying 65 asylum-seekers came ashore late May after being intercepted by the Australian navy.

Marsudi said that she had raised the issue on the sidelines of a conference in Jakarta with Australia’s ambassador to Indonesia, Paul Grigson.

“I just asked him ‘What is it about, tell me, what is it?’,” she told reporters.

“We are really concerned if it is confirmed.”

The escalating row risks further damaging relations between Australia and its northern neighbour, which are already tense after Indonesia executed two Australian drug smugglers by firing squad in April.

Indonesian authorities have launched an investigation into the alleged payments to the crew of the boat carrying asylum-seekers from Bangladesh, Myanmar and Sri Lanka, which was intercepted en route to New Zealand.

Abbott said on Friday that Australia would do “whatever we need” to combat people-smuggling — but repeatedly refused to deny that a payment was made.

“By hook or by crook, we are going to stop the trade,” he said. “We have stopped the trade and we will do what we have to do to ensure that it stays stopped.”

Agus Barnas, a spokesman for Indonesia’s Coordinating Ministry for Political, Legal and Security Affairs, told The Associated Press that Abbott’s comments could be interpreted as endorsing bribery and would give smugglers an incentive to make the trip. “His statement is very unethical,” Barnas said.

Canberra has embarked on a tough immigration policy since Abbott’s conservative coalition came into power in September 2013 and refuses to accept asylum-seekers arriving by boats.

The policy includes military-led efforts to turn back such boats, which mostly come from Indonesia, and sending asylum-seekers to camps on the Pacific island outpost of Nauru and Papua New Guinea for resettlement despite strong criticism from human rights groups.

Australia has also signed a deal with impoverished Cambodia to accept unwanted refugees in return for millions of dollars in aid over the next four years.

Abbott and his ministers insist the hardline policy has saved the lives of asylum-seekers.

Only one boat with asylum-seekers has reached the Australian mainland since December 2013. Before the policy was introduced, boats were arriving almost daily with hundreds of people drowning en route.

The 65 migrants — 54 from Sri Lanka, 10 from Bangladesh and one from Myanmar — gave their accounts UN refugee officials at a camp in Indonesia, where they had brought ashore and placed in detention, said Baloch Babar, a spokesman for the agency in Geneva.

“They are telling us that they were intercepted by Australian officials at sea,” Mr Babar said in a telephone interview with the New York Times. “They were taken on board an Australian customs boat for four days. They were then put on two blue boats and the crews were paid to take them back to Indonesia.”

News reports in Indonesia quoted police officials in East Nusa Tenggara province, in the remote eastern half of the archipelago, as saying that a captain and five crew members whose boat was intercepted by the Australian navy on May 20 claimed to have each received $5,000 from Australian officials to reverse course. The migrants had reportedly been headed for New Zealand to seek asylum.

TAGS :  Sri Lankan refugees ,  asylum seekers ,  Australia ,  Indonesia ,
Disclaimer: All the comments will be moderated by the AD editorial. Abstain from posting comments that are obscene, defamatory or slanderous. Please avoid outside hyperlinks inside the comment and avoid typing all capitalized comments. Help us delete comments that do not follow these guidelines by flagging them(mouse over a comment and click the flag icon on the right side). Do use these forums to voice your opinions and create healthy discourse.