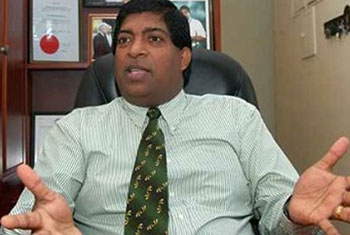 The Sri Lankan economy is expected to expand 7.2 percent this year despite a sluggish increase in the first three months of 2015, on higher growth in tourism, banking and garment manufacturing, Finance Minister Ravi Karunanayake said on Wednesday.

Karunanayake’s forecast is higher than what economists expect and is above the central bank’s estimate of 7 percent growth for the year.

The central bank said in April it expected growth to slow from last year’s 7.4 percent year-on-year because of a slowdown in government-led construction and subdued private investment in the first quarter amid corruption probes on several Chinese-financed infrastructure projects.

“We expect a 7.2 percent growth this year. Despite the slow construction sector, tourism, garment manufacturing and banking are growing faster,” Karunanayake told Reuters. “There are a lot of foreign direct investments expected this year.”

Growth in the construction sector slowed to 4.1 percent in the first quarter, less than a third of the annual average growth rate of 12.8 percent in the last eight years, the government data showed.

Krystal Tan, Asia Economist at Capital Economics said in a note to investors that the country’s growth would pick up in the coming quarters due to rising private sector credit after a rate cut by the central bank in April, improving economic prospects in the U.S. - a key export destination - and big wage hikes for state sector employees.

Sluggish growth in infrastructure, political uncertainty ahead of a parliamentary election, and a retrospective tax would however weigh on growth, Tan said.

“Overall, we doubt Sri Lanka’s economy will be able to match its strong showing of recent years,” Tan said while cutting the 2015 growth estimate to 6.5 percent from 7 percent, well below the average 7.4 percent growth of the past five years.

Prithviraj Srinivas, an economist with Global Research at HSBC, said growth was likely to come under pressure since an atmosphere of policy uncertainty persists, although the central bank had some ammunition left due to lower inflation, Reuters reports.

TAGS :  Ravi Karunanayake ,  Central Bank ,  Economy ,
Disclaimer: All the comments will be moderated by the AD editorial. Abstain from posting comments that are obscene, defamatory or slanderous. Please avoid outside hyperlinks inside the comment and avoid typing all capitalized comments. Help us delete comments that do not follow these guidelines by flagging them(mouse over a comment and click the flag icon on the right side). Do use these forums to voice your opinions and create healthy discourse.