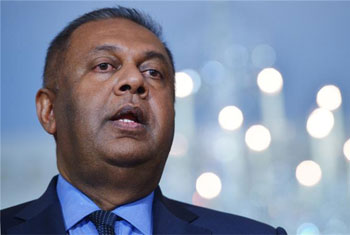 Sri Lanka’s foreign minister says the country will review its China-dependent foreign policy and boost ties with other nations.

Mangala Samaraweera held an interview with NHK on Thursday. He is visiting Japan for the first time since the current government was launched under the new president, Maithripala Sirisena.

Sirisena won a presidential election in January by defeating the incumbent, Mahinda Rajapaksa. Rajapaksa promoted a foreign policy that relies on China.

He indicated that Chinese aid led to rampant corruption under the previous government. He said the Sri Lankan government has suspended a project to improve port facilities in the nation’s largest city, Colombo, and is now reviewing it. He added the project may not have followed appropriate procedures.

Samaraweera stressed that Sri Lanka plans to advance a balanced diplomacy that strengthens relations with all countries, including China.

The minister said Japan rose from the ashes of World War Two and became one of the most powerful nations. He said Japan provides a good lesson for Sri Lanka, which went through a civil war.

TAGS :  Mangala Samaraweea ,  Foreign Minister ,  China ,  Japan ,
Disclaimer: All the comments will be moderated by the AD editorial. Abstain from posting comments that are obscene, defamatory or slanderous. Please avoid outside hyperlinks inside the comment and avoid typing all capitalized comments. Help us delete comments that do not follow these guidelines by flagging them(mouse over a comment and click the flag icon on the right side). Do use these forums to voice your opinions and create healthy discourse.