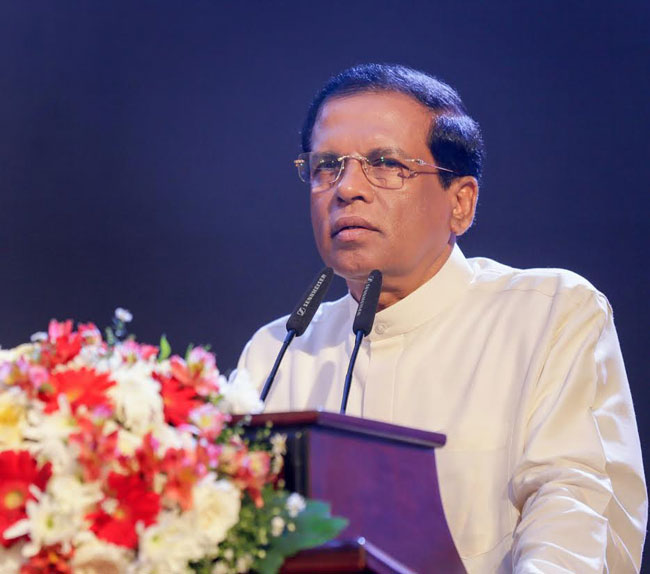 Politicians should not waste public money for the banners and cutouts for their election campaigns and instead should spend that money for the welfare of the people, President Maithripala Sirisena said today.

He pointed out that the politicians of the former governments used the money of state organizations to promote their personalities. They spent thousand billions on that regard, the President said.

“In such an environment, the money I got from various parties for the advertising campaign as the Common Candidate was offered by me to establish a fund for the welfare of kidney patients,” he stated.

President Sirisena made these remarks at the launching ceremony of the new lottery ‘Niroga’, introduced by National Lottery Board for the welfare of kidney patients.

The President said some people spend loads of money within one night at clubs for their entertainment. He requested them to donate that money to enhance the life standard of the kidney patients and poor people in Sri Lanka.

President Sirisena also recalled the actions which have been taken for the welfare of the kidney patients, including establishment of the task force for the prevention of kidney disease and forming a new fund for that in collaboration with business community.

Furthermore, he emphasized the need of spending the money earned from the Niroga lottery completely over the welfare of kidney patients.

Ministers Ravi Karunanayake, Rajitha Senaratne, Mahinda Samarasinghe and the Chairman of National Lottery Board Shyamila Perera (Attorney at Law) were among those participated at this event.

TAGS :  Maithripala Sirisena ,  kidney disease ,  National Lottery Board ,  Niroga ,  kidney patients ,  Ravi Karunanayake ,
Disclaimer: All the comments will be moderated by the AD editorial. Abstain from posting comments that are obscene, defamatory or slanderous. Please avoid outside hyperlinks inside the comment and avoid typing all capitalized comments. Help us delete comments that do not follow these guidelines by flagging them(mouse over a comment and click the flag icon on the right side). Do use these forums to voice your opinions and create healthy discourse.