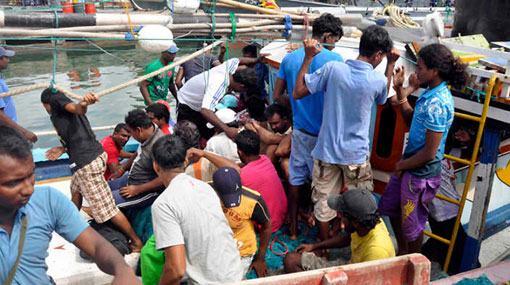 A group of 78 Sri Lankan nationals attempting to illegally sail to Australia by boat were intercepted by Navy personnel in the sea area around 65 nautical miles off Kirinda in the wee hours today, the navy spokesman said.

Commander Indika Silva said that the suspects, arrested at around 12.30am today, included 59 Tamils and 17 Sinhalese while the other 2 were the boat’s crew.

The group is being escorted to the Galle Port to be handed over to relevant authorities, he said.

The arrest comes after a long absence of such illegal sea voyages in search of asylum in Australia.

TAGS :  Sri Lanka Navy ,  asylum ,  Australia ,  Kirinda ,  Indika Silva ,
Disclaimer: All the comments will be moderated by the AD editorial. Abstain from posting comments that are obscene, defamatory or slanderous. Please avoid outside hyperlinks inside the comment and avoid typing all capitalized comments. Help us delete comments that do not follow these guidelines by flagging them(mouse over a comment and click the flag icon on the right side). Do use these forums to voice your opinions and create healthy discourse.