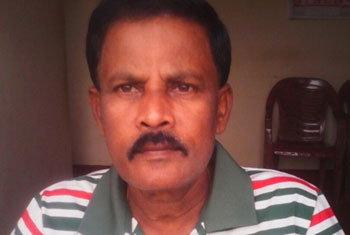 An application by a former top LTTE leader, Athmalingam Ravindra alias Rupan, for an Ilankai Tamil Arasu Katchi (ITAK) ticket to contest the August 17 Sri Lankan parliamentary elections, may have put the ITAK in a fix.

Since the end of Eelam War IV in May 2009, the ITAK has been avoiding ex-LTTE cadres on the grounds that it has eschewed violence and is now a “Gandhian” party, unlike other parties in the Tamil National Alliance (TNA) which have a militant and “bloody” past. The ITAK, founded by Eelaththu Gandhi SJ.V.Chelvanayakam, is the dominant constituent of the four-party TNA.

Keeping the reservations in view, Rupan has pointed out in his application that ITAK chief, Mavai Senathirajah, has himself proudly reminisced about the time he spent in the Batticaloa jail as a young militant, and has described as “unforgettable” his first meeting with LTTE Supremo Velupillai Prabhakaran.

Rupan reminded the other top ITAK leader, R.Sampanthan, that it was Prabhakaran and he  who had ensured his entry into parliament  from Trincomalee district in December 2001 by securing for the TNA 66,500 votes when, only an year earlier in the October 2000 parliamentary elections, the TNA could bag only 13,000 votes in that district.

Delineating his long political experience, Rupan said that he had been a representative of the LTTE in the Interim Council set up in the North-Eastern Province following the India-Sri Lanka Accord in 1987; and was part of the LTTE’s delegation which held talks with President Premadasa in 1990.

If elected, Rupan will be the first LTTE cadre or leader to get into parliament through an election. LTTE’s former Batticaloa area Commander “Col”.Vinayagamoorthy Muralitharan alias Karuna Amman, who was Deputy Minister of National Integration in the Rajapaksa government, was only a nominated MP, New Indian Express reports.