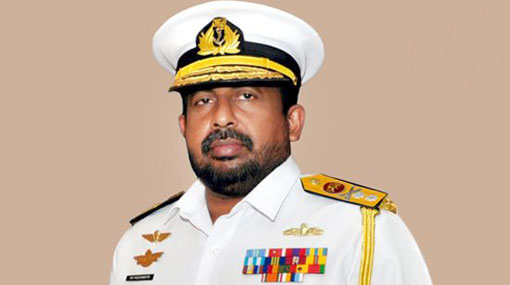 Vice Admiral Ravindra C. Wijegunaratne has been appointed as the 20th Commander of the Sri Lanka Navy with effect from tomorrow (July 11), the Ministry of Defence said.

Wijegunaratne was the former Navy Chief of Staff and the former Director General of Sri Lanka Coast Guard Department. Prior to that, he served as the Commander Eastern Naval Area of the Sri Lanka Navy.

Vice Admiral Wijegunaratne is a highly decorated Navy Officer having gallantry medals for his bravery and valour. He was the 3rd Naval officer to head the Sri Lanka Coast Guard Department.

Earlier today, it was announced that President Maithripala Sirisena had promoted outgoing Navy Chief Vice Admiral Jayantha Perera to the rank of Admiral with effect from Thursday (July 09).

TAGS :  Jayantha Perera ,  Admiral ,  Sri Lanka Navy ,  RC Wijegunaratne ,  Vice Admiral ,  Ravindra Wijegunaratne ,
Disclaimer: All the comments will be moderated by the AD editorial. Abstain from posting comments that are obscene, defamatory or slanderous. Please avoid outside hyperlinks inside the comment and avoid typing all capitalized comments. Help us delete comments that do not follow these guidelines by flagging them(mouse over a comment and click the flag icon on the right side). Do use these forums to voice your opinions and create healthy discourse.