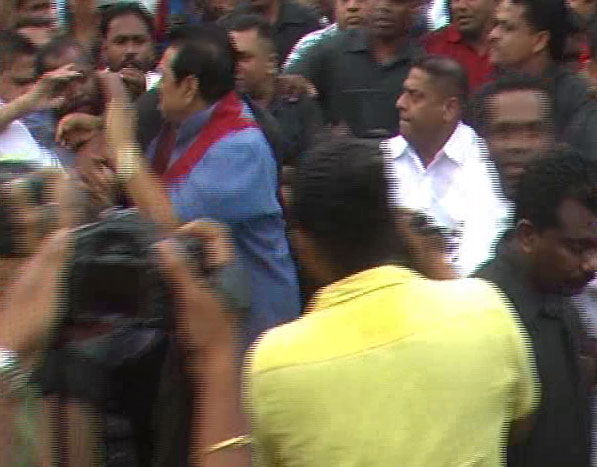 What happened to MR in Akuressa?

The government is attempting to gain political mileage from the incident which transpired after Mahinda Rajapaksa was caught in the grasp of a supporter while traversing through a gathering of supporters at a rally in Akuressa, says the former President’s Media Coordinator, Rohan Weliwita.

He charged that the government is preparing to gain an advantage by giving a wrong interpretation to the incident at a time when information has confirmed that there is a threat to Rajapaksa’s life.

In a statement issued today, Weliwita stated that a large number of people had gathered at the venue of the public rally and that when Mahinda Rajapaksa goes in-between the people as usual, it is difficult even for the security personnel to identify what kind of persons come before him.

He stated that even though a considerable number of persons have been provided as security for the ex-President due to the lack of transportation and communication facilities, even they are gravely inconvenienced at such times.

Detailing as to what actually transpired, Weliwita stated that a certain UPFA supporter had attempted to get close to Mahinda Rajapaksa on several occasions and in the end he had latched on to the former President’s hand tightly.

He stated that the supporter in question was under the influence of alcohol at the time of the incident and that Mahinda Rajapaksa shook off the hand in order to release himself from the tight grip.

TAGS :  Mahinda Rajapaksa ,  Akuressa ,  UPFA ,  Rohan Weliwita ,
Disclaimer: All the comments will be moderated by the AD editorial. Abstain from posting comments that are obscene, defamatory or slanderous. Please avoid outside hyperlinks inside the comment and avoid typing all capitalized comments. Help us delete comments that do not follow these guidelines by flagging them(mouse over a comment and click the flag icon on the right side). Do use these forums to voice your opinions and create healthy discourse.