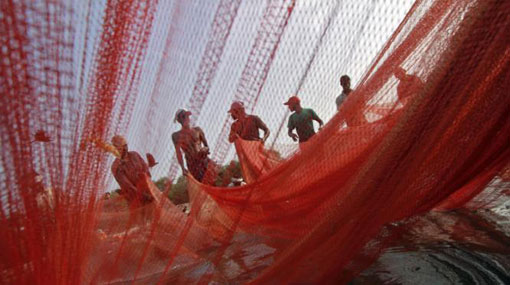 Sri Lankan fishermen have reportedly warned their Indian counterparts that they would be attacked if they continued using banned fishing nets and damaged nets anchored in the Sri Lankan sea.

Justin, a leader of Tamilnadu Fishermen’s Association, was speaking to PTI after participating in a meeting of fishermen of two countries at Talaimannar.

He said the fishermen there had decided to take matters into their own hands as they were not happy with the action taken by the Sri Lankan naval men as well as their government in dealing with Indian fishermen entering their territory and destroying their marine wealth.

The Sri Lankan fishermen had also sent a memorandum to the Indian government, seeking Rs 10 million as compensation for damage to their fishing nets, he said.

TAGS :  Indian fishermen ,  navy ,  SLN ,  fishermen ,  Talaimannar ,
Disclaimer: All the comments will be moderated by the AD editorial. Abstain from posting comments that are obscene, defamatory or slanderous. Please avoid outside hyperlinks inside the comment and avoid typing all capitalized comments. Help us delete comments that do not follow these guidelines by flagging them(mouse over a comment and click the flag icon on the right side). Do use these forums to voice your opinions and create healthy discourse.