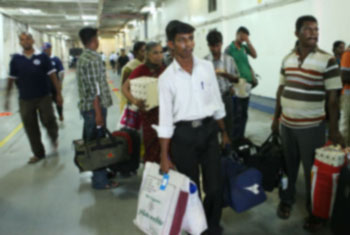 A fresh batch of 45 Sri Lankan Tamil refugees headed back to their homeland from the international airport in Tiruchi on Tuesday, The Hindu reported.

The sources said there were no police cases against the refugees. In May, a group of 41 Lankan Tamil refugees returned to Sri Lanka and another batch of 46 refugees went back last month.

TAGS :  Sri Lankan refugees ,  India ,  Tiruchy ,  TN ,
Disclaimer: All the comments will be moderated by the AD editorial. Abstain from posting comments that are obscene, defamatory or slanderous. Please avoid outside hyperlinks inside the comment and avoid typing all capitalized comments. Help us delete comments that do not follow these guidelines by flagging them(mouse over a comment and click the flag icon on the right side). Do use these forums to voice your opinions and create healthy discourse.