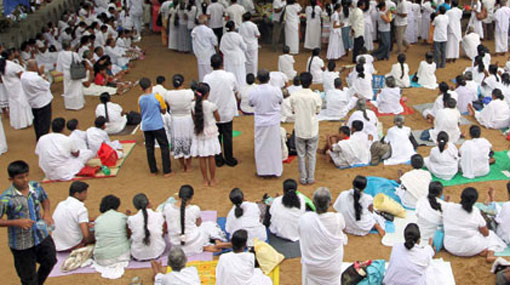 The former MP’s Coordinating Secretary was among the suspects who were arrested near the Abhinawarama Buddhist Temple in Rambakanayagama, Nawagattegama.

They had reportedly been distributing the cards containing a picture and the preference number of Neomal Perera along with the books to devotees at the Temple.

Police seized 80 small books (Pirith Poth), 8 other recital books, 356 cards and posters of the UPFA candidate, 10 T-shirts and 8 caps found in the possession of the suspects.

The two vans used by the suspects to arrive at the location were also taken into police custody.

The arrested men are to be produced before the Puttalam District Court.

TAGS :  Neomal Perera ,  UPFA ,  Nawagattegama ,  Pirith ,  Adhi Esala ,
Disclaimer: All the comments will be moderated by the AD editorial. Abstain from posting comments that are obscene, defamatory or slanderous. Please avoid outside hyperlinks inside the comment and avoid typing all capitalized comments. Help us delete comments that do not follow these guidelines by flagging them(mouse over a comment and click the flag icon on the right side). Do use these forums to voice your opinions and create healthy discourse.