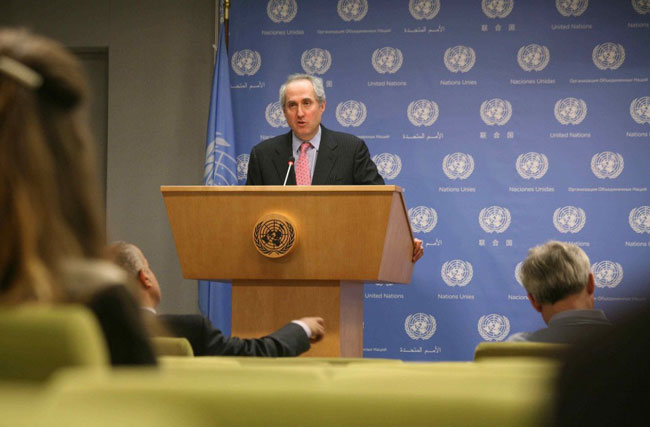 The United Nations says that it’s exploring provision of a broad package of technical and financial assistance to Sri Lanka’s Northern Province, at the request of Chief Minister C.V Wigneswaran.

Stéphane Dujarric, Spokesman for the UN Secretary-General, made these comments in response to a question regarding reports of the UN Peacebuilding Fund considering funding a purely national accountability mechanism in Sri Lanka.

The UN supports the Government and the people of Sri Lanka and their efforts to advance reconciliation and accountability as evidenced by commitments made by the UN Secretary General and during the Under-Secretary-General’s recent visit to Sri Lanka, he said.

“In this regard, we’re exploring provision of a broad package of technical and financial assistance at the request of the Chief Minister, also including the support of the Northern Province to bolster citizen confidence in the peace process,” Mr Dujarric told a press briefing on Friday.

He stated that what is currently under discussion for support by the Peacebuilding Fund are initiatives to advance the process of reconciliation in Sri Lanka by resettlement of internally displaced persons, national reconciliation, strengthening human rights mechanism, and ending impunity.

“The UN support is always based on the basis of inclusive and participatory consultations with all key stakeholders,” he said.

The Spokesman said that already $1 million have been dispersed to support resettlement and integration initiatives for the remaining internally displaced people in the north and east on land that have been returned by the Government.

“For the rest, we continue to consult with the Government of Sri Lanka and the Northern Provincial Council and all key stakeholders to finalize the UN support,” Mr Dujarric said.

He emphasized that the UN is looking at implementing projects both with the support of the Government and the Northern Provincial Council.

When asked about an international mechanism, he said that: “whether it’s domestic or international, that will need to be determined.  We are obviously awaiting the High Commissioner’s report and recommendations to make that decision.”

TAGS :  UN ,  Sri Lanka ,  human rights ,  Stéphane Dujarric ,  Peacebuilding Fund ,  C.V Wigneswaran ,
Disclaimer: All the comments will be moderated by the AD editorial. Abstain from posting comments that are obscene, defamatory or slanderous. Please avoid outside hyperlinks inside the comment and avoid typing all capitalized comments. Help us delete comments that do not follow these guidelines by flagging them(mouse over a comment and click the flag icon on the right side). Do use these forums to voice your opinions and create healthy discourse.