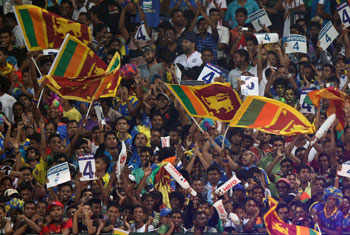 The Police Department today said that special security arrangements have been made for the second and final Twenty20 (T20) match of the series between Pakistan and Sri Lanka to be played at the R Premadasa Stadium in Colombo.

Police Spokesman ASP Ruwan Gunasekara said that every necessary security measure will be taken to ensure that today’s cricket match is staged without any disturbances.

Therefore all items being brought into the stadium will be thoroughly inspected and harmful object such as glass bottles and boxes of matches will not be allowed to be taken inside.

Any person found to be behaving in a drunken or disorderly manner will be placed under arrest, the spokesman said while urging spectators to arrive early at the venue and to bring minimum bags.

The tight security measures come after a riot had forced umpires to suspend play during the 3rd ODI at the Premadasa Stadium on July 19.

Fights had broken out in the terraced section of the south-eastern stand during Sri Lanka’s innings on Sunday while the match was halted for half an hour after a rock was thrown onto the field.

Having won the first T20 match by 29 runs, Pakistan outplayed Sri Lanka in the Test series, before defeating the home team in the ODI series as well.

TAGS :  SLC ,  cricket ,  T20 ,  R Premadasa Stadium ,  Pakistan ,  Police ,
Disclaimer: All the comments will be moderated by the AD editorial. Abstain from posting comments that are obscene, defamatory or slanderous. Please avoid outside hyperlinks inside the comment and avoid typing all capitalized comments. Help us delete comments that do not follow these guidelines by flagging them(mouse over a comment and click the flag icon on the right side). Do use these forums to voice your opinions and create healthy discourse.