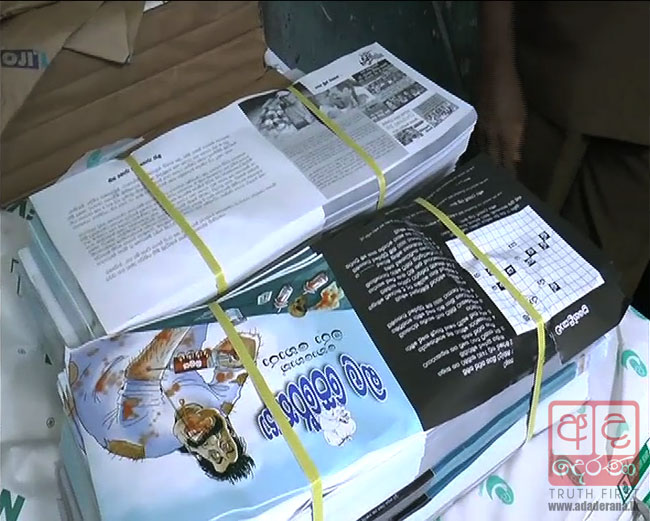 Police today raided a printing press which had allegedly been printing a slanderous book targeting former President Mahinda Rajapaksa, who is contesting the forthcoming General Election.

The press in question is located at Divulapitiya Road in Boralesgamuwa while its owner had informed police that a certain “RMR Printers” had given them the order to print the books, Ada Derana reporter said.

Police had then proceeded to raid the RMR Printing Press which is located at Kadawata Road in Pepiliyana and had seized the printing machines and other equipment.

Meanwhile UPFA Western Provincial Council member Roger Seneviratne claims that the publisher of the book is listed as N. Wickramaratne and that his address is No. 400, Pita Kotte Road, Kotte.

He further said that the entire country knows the above-mentioned address and alleged that the United National Party (UNP) has fallen to the level of slinging mud at a leader who saved the country due to the fear of defeat at the polls.

TAGS :  Mahinda Rajapaksa ,  Roger Seneviratne ,  UNP ,  Kotte ,
Disclaimer: All the comments will be moderated by the AD editorial. Abstain from posting comments that are obscene, defamatory or slanderous. Please avoid outside hyperlinks inside the comment and avoid typing all capitalized comments. Help us delete comments that do not follow these guidelines by flagging them(mouse over a comment and click the flag icon on the right side). Do use these forums to voice your opinions and create healthy discourse.