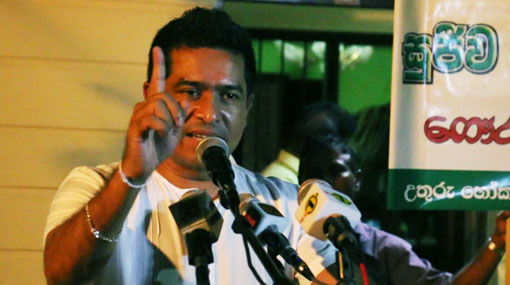 Deputy Justice Minister Sujeewa Senasinghe says that it is wrong to ask a person to consume poison and that it is also wrong to attempt to make someone drink poison.

The former UNP Parliamentarian was referring yesterday’s UPFA press conference during which Dilan Perera and Udaya Gammanpila had produced several vials of poison.

Senasinghe stated that the UPFA candidates had insulted Venerable Maduluwawe Sobitha Thero by saying the vials of poison would be handed to him.

If such invitations are made to consume poison, then barrels of poison should be sent to the leaders who had orchestrated murders and abductions in the past, he told reporters in Colombo.

With regard to a recent incident involving him and a police officer, Senasinghe stated that he had made a request for the officer to be checked as he was under the influence of alcohol.

However, the deputy minister says that he was issued a B Card without any investigation into the complaint and that “incorrect” news reports were carried through media claiming that he threatened the police officer in question.

He also accused the Inspector General of Police (IGP) of failing to take necessary action to punish the murderers of ex-Sri Lankan rugby player Wasim Thajudeen despite the entire country knowing who is responsible for his death.

Senasinghe stated that the IGP has not looked into any of the complaints made by him and called for the immediate resignation of the Police Chief for ignoring his duties.

If not the President or Prime Minister should intervene and remove the IGP, he said.

The deputy minister claimed that a certain organisation known as “K9” had been responsible for the assassination of Lasantha Wickramatunga and the disappearance of journalists such as Prageeth Eknaligoda and that they had used around 9 white vans to carry out abductions.

He charged that the IGP has failed to conduct a proper investigation into this matter.

TAGS :  Sujeewa Senasinghe ,  IGP ,  Dilan Perera ,  Udaya Gammanpila ,  UNP ,  UPFA ,  Ven. Maduluwawe Sobitha Thero ,  Lasantha Wickramatunga ,  Prageeth Eknaligoda ,
Disclaimer: All the comments will be moderated by the AD editorial. Abstain from posting comments that are obscene, defamatory or slanderous. Please avoid outside hyperlinks inside the comment and avoid typing all capitalized comments. Help us delete comments that do not follow these guidelines by flagging them(mouse over a comment and click the flag icon on the right side). Do use these forums to voice your opinions and create healthy discourse.