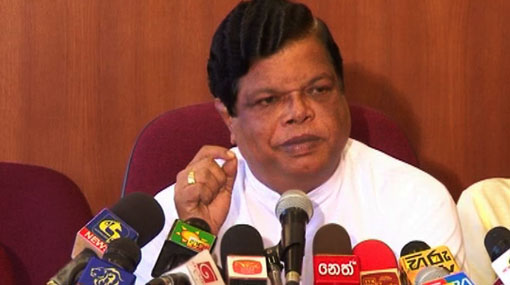 Speaking at a press briefing in Colombo today (6), he stated that the previous UPFA government had allocated Rs 160 billion to uplift the country’s health service.

The former Minister stated that the election manifesto of the United National Party (UNP) proposes the abolishing of free healthcare and establishing of a National Health Service Authority.

He stated that this would result in private sector companies being entrusted with importing and distributing pharmaceutical drugs.

Therefore protest movements should be launched to protect the free health service, he said.

Former MP Dullas Alahapperuma, speaking at the media briefing, claimed that state resources and state officials are being used for election activities in the South and that election laws are being violated heavily.

He alleged that around 250 employees of the Matara SLTB bus depot have been made to take leave and that around 200 of them are being used for election campaigning activities.

Alahapperuma stated that a complaint would be made to the Election Commissioner regarding this matter.

TAGS :  Bandula Gunawardena ,  UPFA ,  Dullas Alahapperuma ,  UNP ,  free health service ,  healthcare ,
Disclaimer: All the comments will be moderated by the AD editorial. Abstain from posting comments that are obscene, defamatory or slanderous. Please avoid outside hyperlinks inside the comment and avoid typing all capitalized comments. Help us delete comments that do not follow these guidelines by flagging them(mouse over a comment and click the flag icon on the right side). Do use these forums to voice your opinions and create healthy discourse.