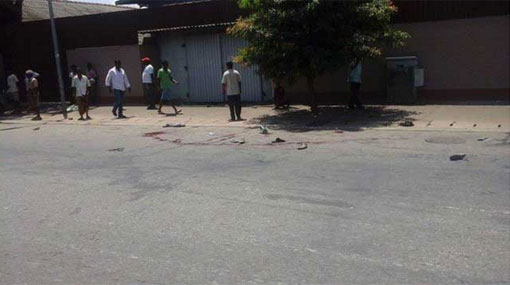 Police today arrested a suspect in connection with last week’s tragic shooting incident at Bloemendhal Road in Colombo, which claimed the life of two persons and wounded a dozen more.

The suspect was arrested by the Criminal Investigations Department (CID) in front of the Hulftsdorp Court Complex on Thursday (6), police said.

The 28-year-old suspect reportedly works as a gym instructor.

Police said that the arrested suspect is being further interrogated to identify the main suspects in the shooting and to recover the weapons used in it.

The car used by the gunmen has also been identified by police while the CID is conducting futher investigations.

Siththy Nasima (42), a resident of Madampapitiya in Kotahena, died while 13 others were wounded drive-by shooting targeting a group of UNP supporters engaged in canvassing for Finance Minister Ravi Karunanayake on July 31.

One of the wounded persons, B. Niroshan Sampath (30), also succumbed to injuries 3 days later.

TAGS :  Bloemendhal shooting ,  gym instructor ,  Kotahena ,  Bloemendhal ,  election violence ,  CID ,  Ravi Karunanayake ,
Disclaimer: All the comments will be moderated by the AD editorial. Abstain from posting comments that are obscene, defamatory or slanderous. Please avoid outside hyperlinks inside the comment and avoid typing all capitalized comments. Help us delete comments that do not follow these guidelines by flagging them(mouse over a comment and click the flag icon on the right side). Do use these forums to voice your opinions and create healthy discourse.