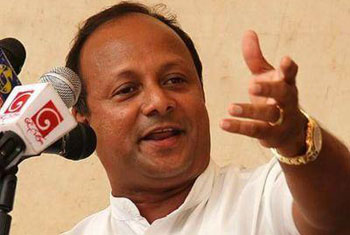 Two persons have been arrested with 21 light bulbs to be distributed at an election meeting in support of former Deputy Minister Neomal Perera in Saliyawewa.

The two suspects, residents of Upper Puliyakulama, were arrested at the Puliyankulama community hall along with a small lorry allegedly used by them.

The election meeting had been organized in support of UPFA Puttalam District candidate Neomal Perera while the arrested persons had reportedly prepared to distribute the light bulbs at this event.

TAGS :  Neomal Perera ,  UPFA ,  Saliyawewa ,  light bulbs ,
Disclaimer: All the comments will be moderated by the AD editorial. Abstain from posting comments that are obscene, defamatory or slanderous. Please avoid outside hyperlinks inside the comment and avoid typing all capitalized comments. Help us delete comments that do not follow these guidelines by flagging them(mouse over a comment and click the flag icon on the right side). Do use these forums to voice your opinions and create healthy discourse.