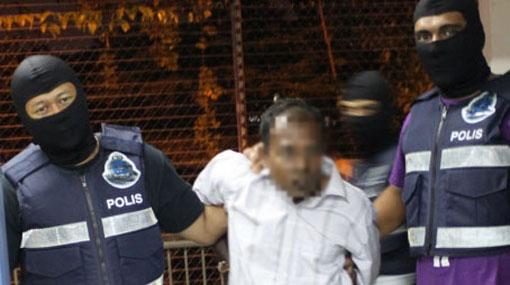 A Sri Lankan man, believed to be a senior member of terrorist group Liberation Tigers of Tamil Eelam (LTTE) has been arrested by Malaysian police in a special raid in Kuala Lumpur, last week.

Intelligence gathered by Bukit Aman’s Special Branch Counter Terrorism division found that the 37-year-old man had entered into the country on Dec 2012 under a social pass.

In a statement issued by Inspector-General of Police Tan Sri Khalid Abu Bakar today, the suspect was believed to have stayed in Malaysia in a bid to hide from the authorities back in his home country.

He had also allegedly extorted money from Sri Lankans residing in Malaysia to gather funds in the aim of reviving the terror group back in Sri Lanka.

“Based on interrogations, the suspect admitted involvement with a credit card forgery syndicate headed by several foreigners.”

The suspect was arrested under Section 15(1)(C) of the Immigration Act 1959/63 for overstaying in the country.

He was deported back to Sri Lanka today to face further actions by the authorities there.

TAGS :  LTTE ,  Malaysia ,  terrprist ,  Kuala Lumpur ,  IGP ,
Disclaimer: All the comments will be moderated by the AD editorial. Abstain from posting comments that are obscene, defamatory or slanderous. Please avoid outside hyperlinks inside the comment and avoid typing all capitalized comments. Help us delete comments that do not follow these guidelines by flagging them(mouse over a comment and click the flag icon on the right side). Do use these forums to voice your opinions and create healthy discourse.