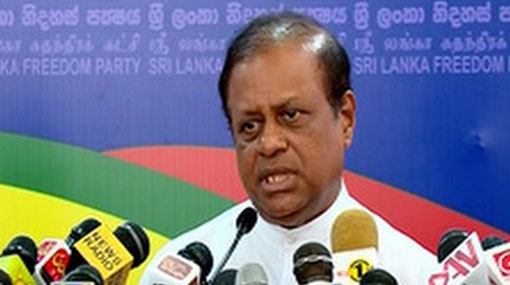 Susil denies being sacked from UPFA

UPFA Colombo District candidate Susil Premajayantha says that media reports alleging that the General Secretaries of the SLFP and UPFA have been removed are completely untrue.

The Colombo District Court today issued an enjoining order preventing Anura Priyadharshana Yapa and Susil Premajayantha from acting and discharging duties as the General Secretaries of the SLFP and UPFA respectively until August 28, 2015.

It has been reported that President Maithripala Sirisena in his capacity as the Chairman of the SLFP and UPFA has cancelled the party membership Anura Priyadharshana Yapa and Susil Premajayantha and has removed them from the posts of General Secretary.

Responding to an inquiry from Ada Derana, Premajayantha charged that a certain individual is attempting to impede the impending victory of the United People’s Freedom Alliance (UPFA) at the general election on Monday (Aug 17).

He stated that according to the constitution of the SLFP, the consent of the Central Committee is required to terminate party memberships or if any person is to be removed from their post.

Premajayantha further said that the SLFP Central Committee cannot be convened due to an enjoining order currently preventing any such meeting.

At the same time the approval of the UPFA Executive Committee is required in order to remove any member from their post, as per the constitution of the UPFA, he said.

Premajayantha stated that the Executive Committee can be convened only by him, as the General Secretary, and that he has done no such thing.

TAGS :  UPFA ,  SLFP ,  Susil Premajayantha ,  Anura Priyadharshana Yapa ,  Colombo District Court ,  enjoining order ,
Disclaimer: All the comments will be moderated by the AD editorial. Abstain from posting comments that are obscene, defamatory or slanderous. Please avoid outside hyperlinks inside the comment and avoid typing all capitalized comments. Help us delete comments that do not follow these guidelines by flagging them(mouse over a comment and click the flag icon on the right side). Do use these forums to voice your opinions and create healthy discourse.