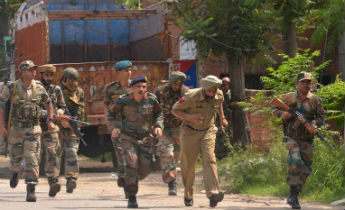 The arrest of 6 men allegedly belonging to the LTTE has left security officials in West Bengal in a spot of bother. They are verifying why these six men had come to Kolkata from Chennai.

The police say that they have arrested two senior operatives of the LTTE, Gunasekaran and Bala Singham and four others from the Chandini Chowk central in Kolkata. The operation was carried out by the special task force.

The motive behind the visit of these six persons is still unclear. They have not spelt out anything clearly as of now. All of them are Sri Lankan Tamils, a police official informed.

They had entered into Kolkata four days back. We have ascertained that all the six had come to Kolkata by train from Chennai, the police also informed.

“There are various aspects that are being probed for now. We want to find out if they had any naxal links. The possibility of them trying to hold talks with naxals is not ruled out.”

The other aspect under investigation is whether they were in Kolkata to supply arms. The naxals are in re-building mode and could have sought the help of these LTTE cadres, the police suspect.

The police are probing why the six came to Kolkata before the Independent Day celebrations. Two of them -- Guna Sekharan and Bala Singham are senior leaders of the banned outfit. Police are checking if they came for any operations or for any reconnaissance.

Even the police are interrogating them to find if they had links with Maoists, as there are reports that the Maoists are gradually regrouping in Bengal and have plans to start guerilla warfare in Jungalmahal area of Bengal.

Moreover, the police are also probing if LTTE was supplying arms to the Maoists.

TAGS :  LTTE ,  India ,  Kolkata ,  Chennai ,  Gunasekaran ,  Bala Singham ,  Chandini Chowk ,
Disclaimer: All the comments will be moderated by the AD editorial. Abstain from posting comments that are obscene, defamatory or slanderous. Please avoid outside hyperlinks inside the comment and avoid typing all capitalized comments. Help us delete comments that do not follow these guidelines by flagging them(mouse over a comment and click the flag icon on the right side). Do use these forums to voice your opinions and create healthy discourse.