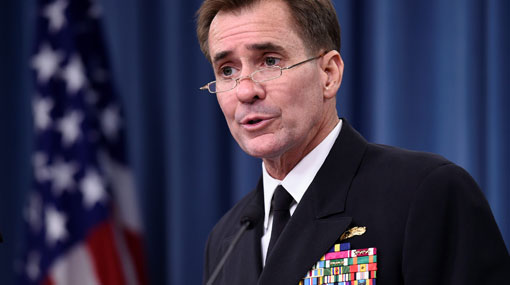 US commends commitment to democracy

The United States has commended Sri Lanka’s commitment to democracy and rule of law as displayed by the peaceful parliamentary elections.

Spokesperson of U.S. State Department, John Kirby at the press briefing said the United States commends the Sri Lankan people and government for Monday’s election, which demonstrated their “enduring commitment to democracy and the rule of law.”

The United States applauded the Sri Lankan Elections Commissioner, Sri Lankan civil society, and the candidates themselves for holding free and fair elections that were widely hailed as among the most peaceful in Sri Lanka’s history.

“The United States looks forward to working with President Sirisena, the prime minister, and the new government,” the spokesperson said.

The conduct of Sri Lanka’s parliamentary election on Monday drew praise from the UN as well as the international community for being the most peaceful free and fair election in the recent history.

TAGS :  United States ,  US ,  parliamentary elections ,  U.S. State Department ,  John Kirby ,
Disclaimer: All the comments will be moderated by the AD editorial. Abstain from posting comments that are obscene, defamatory or slanderous. Please avoid outside hyperlinks inside the comment and avoid typing all capitalized comments. Help us delete comments that do not follow these guidelines by flagging them(mouse over a comment and click the flag icon on the right side). Do use these forums to voice your opinions and create healthy discourse.