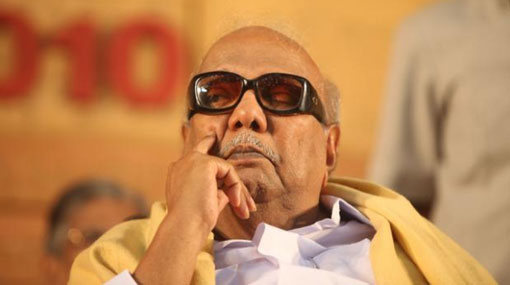 DMK President M Karunanidhi today congratulated Ranil Wickremesinghe for his victory in the Sri Lanka parliamentary elections and hoped the Tamil National Alliance win in North and East provinces would give rise to a situation for a permanent solution to travails of Tamils.

Mr Wickremesinghe’s United National Party won a total of 106 seats in the 225-member Assembly, falling short of an absolute majority by seven seats but enough to form a government.

“Tamil National Alliance emerging as the third-largest party is an important turning point in this election. After this election, Wickremesinghe is all set to become Prime Minister again. On behalf of DMK I extend my greetings to him”, Karunanidhi said in a statement.

The former Tamil Nadu Chief Minister said, “with the Tamil National Alliance win in the election we can hope that a situation has arisen for finding a permanent solution to the travails of Eelam Tamils”.

“I express my desire that suitable decisions will be taken in the Parliament in which Tamils living in Sri Lanka would lead a peaceful life and have equal rights.”, he said.

The UNP fell short of a majority, but a pledge of “issue-based” support from the Tamil National Alliance (TNA), which holds the balance of power with 16 seats, will allow the party to carry out promised political and economic reforms.

“We will sit in the opposition but extend support to the government,” TNA lawmaker Dharmalingam Sithadthan told AFP Wednesday.

“It will be issue-based support, but we think we can work with the prime minister.”

He also has the backing of one more MP from the Sri Lanka Muslim Congress party.

TAGS :  Ranil Wickremesinghe ,  DMK ,  M Karunanidhi ,  UNP ,  UPFA ,  Mahinda Rajapaksa ,
Disclaimer: All the comments will be moderated by the AD editorial. Abstain from posting comments that are obscene, defamatory or slanderous. Please avoid outside hyperlinks inside the comment and avoid typing all capitalized comments. Help us delete comments that do not follow these guidelines by flagging them(mouse over a comment and click the flag icon on the right side). Do use these forums to voice your opinions and create healthy discourse.