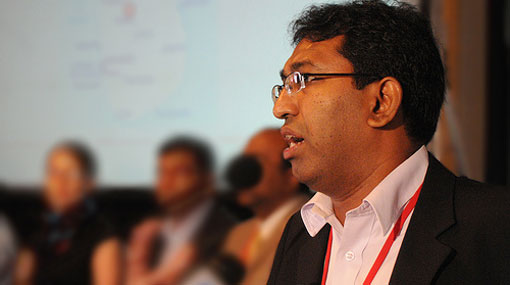 Sri Lanka is moving past its history of ethnic strife and seeking to emulate Singapore, Hong Kong and Dubai as one of the region’s premier trading and financial hubs, Harsha De Silva told Bloomberg.

“Our focus entirely is going to be on creating the most competitive economy in this part of the world,” Harsha de Silva, who helped draft the United National Party’s economic policy, said in an interview in Colombo on Wednesday. “We are going to have to play in a different league.”

The UNP won the most seats in an election on Monday after pledging to create jobs and heal wounds stemming from a bloody civil war that ended in 2009. Prime Minister Ranil Wickremesinghe, the party’s leader, will probably be appointed to lead the government for another term later this week.

The ruling party wants to revive growth that slowed to a two-year low with moves to make it easier for the private sector to do business. It has also pledged to avoid discriminatory policies that may stoke tensions between the Sinhalese majority and Tamil minority.

Even so, other Sri Lankan leaders have pledged to emulate Singapore in the past with little success.

Sri Lanka’s challenges to compete with Asia’s economic powerhouses are immense: Loss-making state-owned firms dominate an economy four times smaller than Singapore that relies mostly on tourism and exports. Access to financing, an inefficient bureaucracy and tax issues are the top impediments for Sri Lankan businesses, according to the World Economic Forum.

In the 1950s, the situation was reversed. On a visit to Sri Lanka, then known as Ceylon, Singapore founder Lee Kuan Yew came away impressed with the country’s infrastructure and stone-faced buildings in Colombo. Yet over the years, he saw “a promising country go to waste” due to conflict between the Sinhalese and Tamils, according to his memoir.

Progress on ethnic reconciliation has been slow. Former Sri Lankan leader Mahinda Rajapaksa, who crushed a Tamil uprising to end the war, lost to President Maithripala Sirisena in January due to a backlash over his efforts to consolidate power. The conflict killed as many as 40,000 people.

The parliamentary elections this week gave Sirisena’s allies in Tamil parties and the UNP a mandate to implement more free-market economic reforms and promote reconciliation. It also endorses improved ties with the U.S., Europe and India, key export markets where leaders had expressed concerns over atrocities committed during the war.

“Our plans are to have ethnic harmony in this country,” said de Silva, the deputy minister of Policy Planning and Economic Affairs in the government appointed after Sirisena took power. “It’s not about what happened in the past. It’s about our future.”

Many of the island’s Tamil-majority areas are also among its poorest. Four of the five districts with the lowest median per capita income are majority Tamil, and the fifth is dominated by Tamils and Muslims.

Rajapaksa openly appealed to Sinhalese nationalists on the campaign trail, prompting Sirisena to accuse him of racism. The Tamil parties that control the balance of power in parliament want measures “that fulfill the expectations of a diverse society to live as equals,” said R. Sampanthan, head of the Tamil National Alliance, which won 16 seats in the election.

It remains to be seen how quickly the government will investigate human-rights abuses during the war, release detainees and free up land seized by the military, according to Alan Keenan, Sri Lanka Project Director for International Crisis Group, a policy research group.

“The ball is now in the government’s court,” he said. “The danger is if the pace of progress on this reconciliation agenda doesn’t pick up you will get growing frustration among Tamils.”

One of the best ways for the new government to heal the ethnic divide and take Sri Lanka’s economy to the next level is to allow the private sector to flourish, said Razeen Sally, an associate professor at the National University of Singapore.

“Ranil Wickremesinghe is the closest thing Sri Lanka has to a free-market politician with a worldview,” he said. “There are now the best prospects in actually a very long time for some serious market reforms in Sri Lanka,” Bloomberg reports.

TAGS :  Harsha De Silva ,  Economy ,  Business ,
Disclaimer: All the comments will be moderated by the AD editorial. Abstain from posting comments that are obscene, defamatory or slanderous. Please avoid outside hyperlinks inside the comment and avoid typing all capitalized comments. Help us delete comments that do not follow these guidelines by flagging them(mouse over a comment and click the flag icon on the right side). Do use these forums to voice your opinions and create healthy discourse.