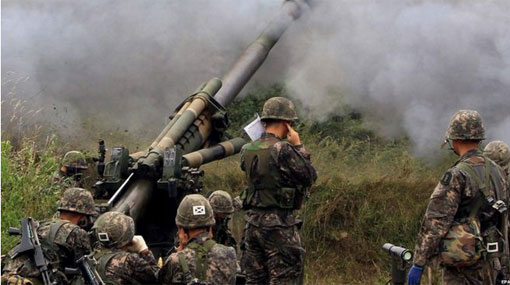 South Korea on Thursday fired dozens of shells into North Korea after detecting a rocket fired across the heavily militarised border from the North, Seoul’s defence ministry said.

The exchange of fire came at a time of elevated cross-border tensions, following mine blasts that maimed two members of a South Korean border patrol earlier this month and the launch this week of a major South Korea-US military exercise.

A ministry spokesman said South Korea had detected a rocket fired from the North Korean side across a western section of the border shortly before 4:00pm (0700 GMT).

“It landed on our side, but struck no military target,” the spokesman told AFP, adding there were no apparent casualties or damage.

South Korean military units retaliated by launching “dozens of rounds of 155 mm shells” targeting the site from which the rocket was believed to have been launched, the ministry said in a statement.

“We have strengthened our military readiness and are closely watching movements of the North’s military,” the statement said.

The spokesman said South Korean troops had been placed on highest-level alert.

A local government official in Yeoncheon county -- 60 kilometres (37 miles) north of Seoul -- told AFP that residents of several border villages had been ordered to evacuate their homes for nearby shelters.

The incident will further ratchet up tensions that have soared in recent weeks following the border landmine incident.

Seoul said the mines were placed by North Korea and responded by resuming high-decibel propaganda broadcasts across the border, using loudspeakers that had lain silent for more than a decade.

The North denied any role and threatened “indiscriminate” shelling of the loudspeaker units unless they halted their broadcasts immediately.

It also threatened retaliatory strikes after Seoul and Washington refused to call off their annual Ulchi Freedom military drill, which kicked off Monday and roleplays responses to an invasion by the nuclear-armed North.

The last direct attack on the South was in November 2010 when North Korea shelled the South Korean border island of Yeonpyeong, killing two civilians and two soldiers.

TAGS :  South Korea ,  North Korea ,  Seoul ,  US ,
Disclaimer: All the comments will be moderated by the AD editorial. Abstain from posting comments that are obscene, defamatory or slanderous. Please avoid outside hyperlinks inside the comment and avoid typing all capitalized comments. Help us delete comments that do not follow these guidelines by flagging them(mouse over a comment and click the flag icon on the right side). Do use these forums to voice your opinions and create healthy discourse.