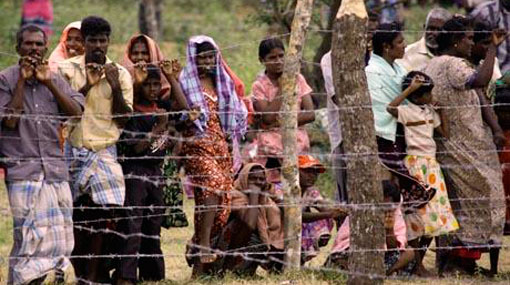 The Sri Lankan Tamils at the Mandapam camp reacted to the election of United National Party (UNP) leader Ranil Wickremesinghe as Prime Minister with cautious optimism.

The refugees heaved a sigh of relief that former President Mahinda Rajapaksa suffered yet another debacle but at the same time were not elated at the victory of Mr. Wickremesinghe.

The return of Mr. Wickremesinghe as Prime Minister may not make a substantial difference in addressing the long-pending issues faced by the Tamils in the island nation, the refugees felt.

A cross section of the refugees, especially women, felt that the composition of new government would still have a Sinhalese majority and remained sceptical about the new dispensation meeting the genuine demand for devolution of power and equal rights to the Tamils.

“He is also a Sinhala but his election has given a ray of hope to the Tamils in the island,” P. Thushe (35), a native of Savacheri in Jaffna, who had arrived here as refugee in 2010 said.

She came with her husband, leaving behind her two children with her mother in Savacheri. After her husband went to Switzerland, she has been eking out a living running a fancy store outside the camp.

She was worried that she was living alone but happy as she enjoyed freedom. “This is the kind of freedom the Tamils in the island nation are yearning for,” she told The Hindu on Thursday.

Even six years after the end of the war, the Tamils were not happy in the island. The much-hyped devolution of powers, resettlement of the displaced Tamils and the dismantlement of army were still a distant dream for the Tamils, she said.

Echoing her view was M. Sasikala and S. Nishthani who hailed from Trincomalee and Puthalam areas respectively. Sasikala’s relative had left the camp in 2010 looking for greener pastures in her native Sambur village only to be detained in the camp there, she said.

President Maithripala Sirisena did nothing substantial for the Tamils during the last eight months after he came to power and it remains to be seen whether Mr. Wickremesinghe would do something, they said. It was also doubtful whether the new dispensation could do something to the Tamils with Mr. Rajapaksa heading a strong opposition, they pointed out.

M. Sathik, a native of Pulmettai in Trincomalee and in the camp since 2008, said the coming together of Tamil National Alliance (TNA) and the UNP has given a new hope for the Tamils. “Veteran TNA leader R. Sampanthan and Chief Minister C.V. Vigneswaran should fight for the merger of northern and eastern provinces and secure equal rights to the Tamils,” he said.

TAGS :  Sri Lankan refugees ,  Ranil Wickremesinghe ,  Mahinda Rajapaksa ,  UNP ,  PM ,  Mandapam ,  TN ,
Disclaimer: All the comments will be moderated by the AD editorial. Abstain from posting comments that are obscene, defamatory or slanderous. Please avoid outside hyperlinks inside the comment and avoid typing all capitalized comments. Help us delete comments that do not follow these guidelines by flagging them(mouse over a comment and click the flag icon on the right side). Do use these forums to voice your opinions and create healthy discourse.