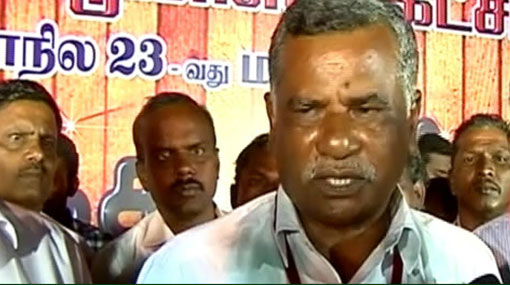 The Communist Party of India (CPI) on Friday said that the Centre should take efforts to find a solution to the problems of Tamil population in Sri Lanka, considering the changed political equation in that country.

Though there were high expectations after the defeat of Mahinda Rajapaksa and installation of Maithripala Sirisena as President last year, but no development had taken place either with regard to Tamils or giving equal status on par with Sinhalese to them, CPI Tamil Nadu Secretary R Mutharasan told reporters in Coimbatore.

With Ranil Wickramesinghe taking charge as Prime Minister of Island Nation for the fourth time, NDA government should take serious efforts from the word go to find an amicable solution to the contentious issue, he said.

TAGS :  CPI ,  Ranil Wickremesinghe ,  Maithripala Sirisena ,  India ,  NDA ,
Disclaimer: All the comments will be moderated by the AD editorial. Abstain from posting comments that are obscene, defamatory or slanderous. Please avoid outside hyperlinks inside the comment and avoid typing all capitalized comments. Help us delete comments that do not follow these guidelines by flagging them(mouse over a comment and click the flag icon on the right side). Do use these forums to voice your opinions and create healthy discourse.