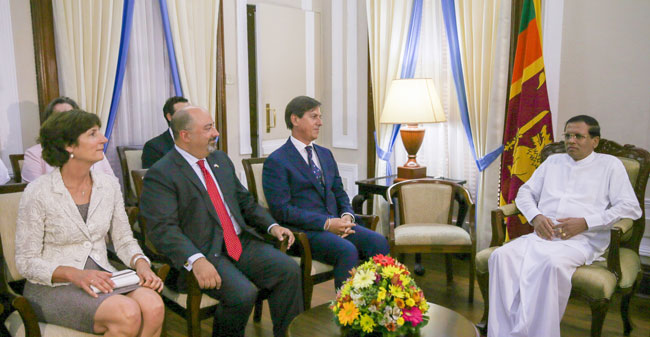 The United States has assured its fullest support to Sri Lanka’s economic development and reconciliation while emphasizing that Washington wishes to take bilateral relations with the island nation to a new height.

Keshap was among three new Ambassadors who presented their credentials to President Sirisena at the Presidential Secretariat today (August 21), the other two being Italian Ambassador Paolo Andrea Bartorelli and the Netherlands Ambassador Joanne Doornewaard.

President Sirisena, referring to close bilateral relations with Sri Lanka and the countries represented by the new envoys expressed confidence that they would strive to further strengthen bilateral friendship and cooperation in many areas including trade, investment and tourism.

The President also recalled the close economic cooperation between Sri Lanka and the three counties represented by the new Ambassadors, the Presidential Media Unit said.

Thanking them for the continuous assistance provided for Sri Lanka’s economic development by the United States, Italy and the Netherlands, the President also expressed gratitude for the support given by those countries in international forums.

American Ambasador Keshap conveyed best wishes from President Obama and Secretary State John Kerry to President Sirisena and assured the fullest US support to Sri Lanka’s economic development and reconciliation. He said that his country wishes to take bilateral relations with Sri Lanka to a new height.

The Netherlands Ambassador Ms Doornewaard assured the President that her country was ready to assist Sri Lanka’s development activities and offered support for implementation of President Sirisena’s economic and development policies.

TAGS :  US ,  Washington ,  Italy ,  Netherlands ,  Atul Keshap ,  Paolo Andrea Bartorelli ,  Joanne Doornewaard ,  Maithripala Sirisena ,
Disclaimer: All the comments will be moderated by the AD editorial. Abstain from posting comments that are obscene, defamatory or slanderous. Please avoid outside hyperlinks inside the comment and avoid typing all capitalized comments. Help us delete comments that do not follow these guidelines by flagging them(mouse over a comment and click the flag icon on the right side). Do use these forums to voice your opinions and create healthy discourse.