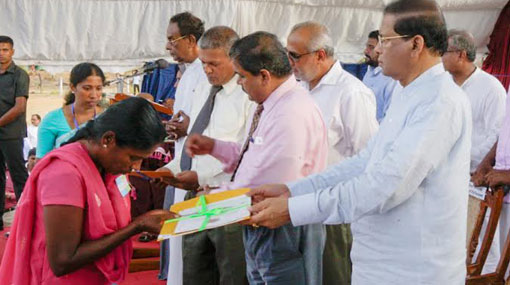 As a part of Government’s effort to resettle Tamils in North and East, a ceremony was held under the patronage of President Maithripala Sirisena to hand over the land deeds to 234 war displaced families in Sampur, on Saturday.

During the tenure of the past government 818 acre of lands had been vested with the BOI by using a special gazette notification, but after the Maithripala Sirisena came into power the lands had been taken back to the Government and returned it to the original owners.

Addressing the ceremony, the President said that we cannot expect a development without the blessings of the people.

He further said that he will commit to solve the problems of the people living in North as well as the South without any discrimination.

President Sirisena said that the country will be able to take forward as a peaceful country only by giving equal opportunities to every citizen of the country and building peace and reconciliation among the communities.

People informed the President regarding the pertaining problems in the area and the difficulties faced by them due to the shortage of electricity, sanitation and infrastructure facilities.

People living in temporary shelters informed the President regarding the inconveniences they could be faced in the future during the next raining season. After listening to their grievances the President gave directions to relevant authorities to take action to provide speedy reliefs to those who are affected.

President Sirisena symbolically handed over deeds of the lands to 25 persons at this occasion.

TAGS :  Tamils in North and East ,  Tamils ,  North ,  East ,  Maithripala Sirisena ,
Disclaimer: All the comments will be moderated by the AD editorial. Abstain from posting comments that are obscene, defamatory or slanderous. Please avoid outside hyperlinks inside the comment and avoid typing all capitalized comments. Help us delete comments that do not follow these guidelines by flagging them(mouse over a comment and click the flag icon on the right side). Do use these forums to voice your opinions and create healthy discourse.