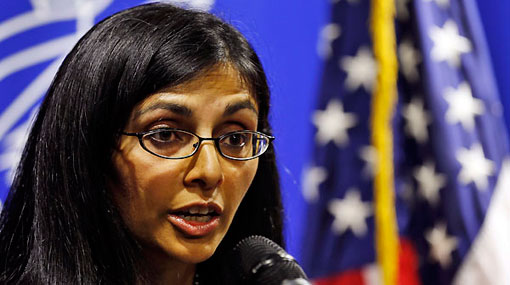 The visit of Nisha Biswal, US Assistant Secretary of State for South and Central Asia on Tuesday to discuss the UN Human Rights Commissioner’s report on war crimes in Sri Lanka, has hastened the swearing-in of Mangala Samaraweera as Foreign Minister; Wijeyadasa Rajapakshe as Justice Minister;  and D.M.Swaminathan as Resettlement Minister. The trio were inducted by President Maithripala Sirisena on Monday.

Though the results of the parliamentary elections came out on August 19, and Prime Minister Ranil Wickremesinghe was sworn-in immediately, the full Council of Ministers is yet to be formed. The delay is due to a conflict between the United National Front for Good Governance (UNFGG) and the United Peoples’ Freedom Alliance (UPFA), on how many ministerial berths each should get in the proposed “National Government.”

The conflict stems from the fact that the gap between the winner and runner up is narrow. In the 225-seat parliament, the UNFGG has 106 and the UPFA 95. Though the UNFGG has more, it does not enjoy majority. The UPFA is using this to drive a hard bargain.

But since US Assistant Secretary of State Biswal is coming to discuss the UN’s war crimes report, which is to be handed over to the Lankan President this week, it was decided to swear-in the Foreign, Justice and Resettlement ministers at least.

The US, which wants to help the Sirisena-Wickremesinghe government face the UN Human Rights Council (UNHRC) on the war crimes issue, is prodding it to set up the promised “credible” domestic mechanism to probe war crimes charges. At the March session of the UNHRC, Colombo promised to set it up before the September session. But it was not set up on the plea that parliamentary elections had to be won first. Since the government has won the elections, Biswal will demand delivery on the promise.

The government will try to show Biswal that it has been addressing the war victims’ grievances by beginning to give back 2000 acres of land seized by the military and demilitarizing the former war zone, The New Indian Express reports.

TAGS :  Nisha Biswal ,  US ,  UNHRC ,  War Crimes ,  Mangala Samaraweera ,
Disclaimer: All the comments will be moderated by the AD editorial. Abstain from posting comments that are obscene, defamatory or slanderous. Please avoid outside hyperlinks inside the comment and avoid typing all capitalized comments. Help us delete comments that do not follow these guidelines by flagging them(mouse over a comment and click the flag icon on the right side). Do use these forums to voice your opinions and create healthy discourse.