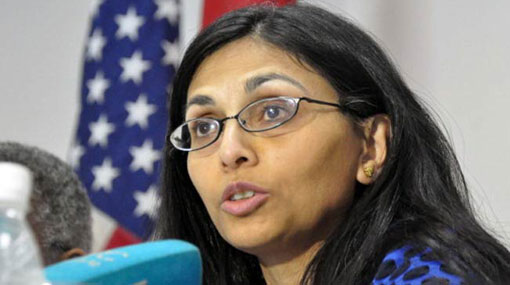 The United States said Wednesday that it wants to sponsor a resolution at next month’s U.N. human rights session that is supportive of Sri Lanka’s government, which wants to conduct its own investigation into alleged war crimes.

The announcement by the visiting Assistant Secretary of State Nisha Biswal of a joint resolution with the Sri Lankan government presents a major shift by Washington on the South Asian island nation.

“The U.S has announced it will be offering a resolution at the September session of the Human Rights Council. It will be a resolution of collaboration with the government of Sri Lanka and with other key stake holders,” she said.

The U.S was in the forefront in adopting three resolutions at the U.N. human rights session on Sri Lanka, the last of which last year called for an international independent investigation into the alleged abuses.

Biswal said, however, the U.S. now supports a local investigation that the new Sri Lanka government of President Maithripala Sirisena has promised.

“We have recognized that there is a different opportunity that exists today and a different landscape for trying to advance reconciliation,” Nisha Biswal, she told reporters in Colombo. “We look forward to a process in Geneva that allows an opportunity to reflect on that.”

Biswal did not say what the new resolution would contain, but said it will follow a report by the U.N. Human Rights Council scheduled to be released next month.

Relations between the U.S. and Sri Lanka were strained under previous President Mahinda Rajapaksa, who oversaw a military campaign that defeated separatist Tamil Tiger rebels six years ago and ended a decades-long civil war.

Both sides were accused of serious human rights violations amounting to war crimes, and an earlier U.N. report said some 40,000 ethnic Tamil civilians were killed in just the last few months of the fighting, largely as a result of the government’s shelling.

Rajapaksa’s repeated refusal to investigate the allegations and his increasing leaning toward China for support at international fora and financing of his infrastructure projects affected relations with U.S.

The relations have improved since Sirisena’s surprise election victory in January, with the new president moving away from a heavy pro-China policy and agreeing to conduct a local investigation into the abuse allegations.

TAGS :  US-SL ,  Nisha Biswal ,  UNHRC ,  Colombo ,  US ,  Washington ,  UN ,  Maithripala Sirisena ,  Mangala Samaraweera ,
Disclaimer: All the comments will be moderated by the AD editorial. Abstain from posting comments that are obscene, defamatory or slanderous. Please avoid outside hyperlinks inside the comment and avoid typing all capitalized comments. Help us delete comments that do not follow these guidelines by flagging them(mouse over a comment and click the flag icon on the right side). Do use these forums to voice your opinions and create healthy discourse.