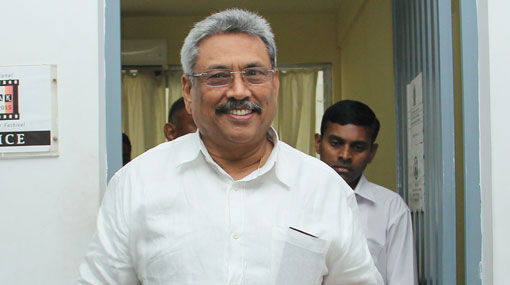 Police this year seized more than 3,000 weapons in 20 containers from the armoury, run by private security firm Avant Garde Maritime Services (Pvt) Ltd and docked in port of Galle.

The armoury was a commercial venture that stored weapons for maritime security guards stationed on ships that pass near Sri Lanka, located on one of the world’s busiest sea routes.

The loosely regulated practice of arming merchant ships has flourished in recent years in response to the threat of piracy.

TAGS :  Gotabaya Rajapaksa ,  Former Defence Secretary ,  Avant Garde Maritime Services ,
Disclaimer: All the comments will be moderated by the AD editorial. Abstain from posting comments that are obscene, defamatory or slanderous. Please avoid outside hyperlinks inside the comment and avoid typing all capitalized comments. Help us delete comments that do not follow these guidelines by flagging them(mouse over a comment and click the flag icon on the right side). Do use these forums to voice your opinions and create healthy discourse.

Mahinda Amaraweera on why he accepted ministerial portfolio

Mahinda Amaraweera on why he accepted ministerial portfolio