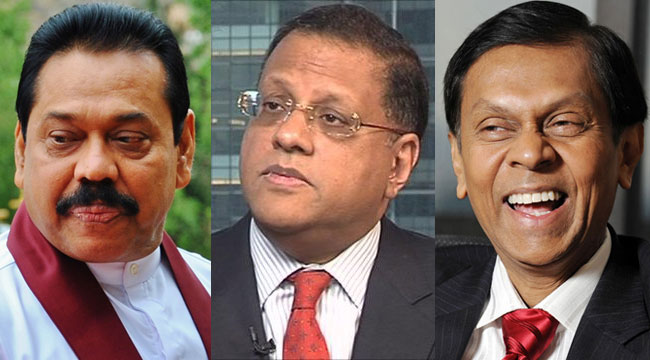 The petitions filed with the Colombo Magistrate’s Court against former President Mahinda Rajapaksa, Governor of the Central Bank Arjuna Mahendran and former CB Governor Ajith Nivard Cabraal have been withdrawn.

The petition against Mr Mahendran and his son-in-law Arjun Aloysius was filed by UPFA Provincial Councillor Renuka Perera, over the controversial Treasury Bond issue.

An attorney appearing on behalf of the Commission to Investigate Allegation of Bribery or Corruption today informed the court that the commission is investigating the charges.

As investigations into the allegations are ongoing, the petitioner informed the court that the petition will be withdrawn while Colombo Chief Magistrate Gihan Pilapitiya permitted the withdrawal.

The cases were filed by Attorney-at-Law Kelum Kumarasiri.

TAGS :  Mahinda Rajapaksa ,  Arjuna Mahendran ,  Ajith Nivard Cabraal ,  Arjun Aloysius ,  Renuka Perera ,  CB ,
Disclaimer: All the comments will be moderated by the AD editorial. Abstain from posting comments that are obscene, defamatory or slanderous. Please avoid outside hyperlinks inside the comment and avoid typing all capitalized comments. Help us delete comments that do not follow these guidelines by flagging them(mouse over a comment and click the flag icon on the right side). Do use these forums to voice your opinions and create healthy discourse.