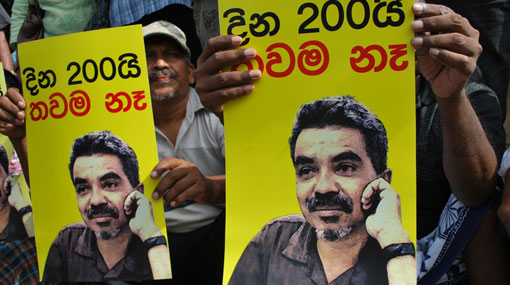 Attempts are being made to suppress an investigation in the missing of a prominent journalist in Sri Lanka ahead of the 2010 presidential polls while he was working for former Army chief Sarath Fonseka, civil society activists have claimed, the Press Trust of India reported.

“Please do not try to cover up the investigation. We have noticed lethargy on the part of certain officials,” Saman Ratnapriya, a civil society activist told reporters.

“Despite the local and international interest on the case, no proper investigations were done,” he said. Prageeth Ekanligoda, a cartoonist, disappeared in January 2010 while he was working in the campaign of the then presidential candidate Sarath Fonseka.

The Lankan Crime Investigations Department (CID) have arrested eight persons, including two lieutenant colonels, in the case. It was said that Ekanligoda was quizzed by the Army in an eastern military detachment before he disappeared.

However, police spokesman Ruwan Gunasekera denied any pressure being brought on the CID to suppress the probe.

“The investigations are proceeding. There is no pressure whatsoever,” he said.

Sections of the military believes that Eknaligoda had links with the LTTE during the height of the civil war.

“We have to ensure that local mechanisms for justice are well and good. Only then we will be able to stop international investigations”, Ratnapriya said referring to action by the UN Human Rights Council for an international probe into alleged human rights abuses during the 2006-2009 conflict. (PTI)

TAGS :  Prageeth Eknaligoda ,  CID ,
Disclaimer: All the comments will be moderated by the AD editorial. Abstain from posting comments that are obscene, defamatory or slanderous. Please avoid outside hyperlinks inside the comment and avoid typing all capitalized comments. Help us delete comments that do not follow these guidelines by flagging them(mouse over a comment and click the flag icon on the right side). Do use these forums to voice your opinions and create healthy discourse.