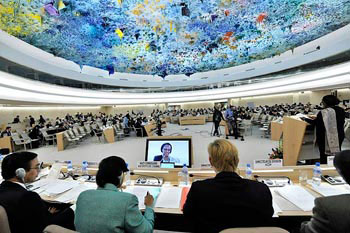 The UN probe report on alleged war crimes committed during the final phase of Sri Lankan military’s battle against the LTTE has been handed over to the government.

The report, scheduled for public release during the 30th Session of the UN Human Rights Council which kicks off next Monday in Geneva, was received by the government last night, foreign ministry sources said today.

The presentation of the report was deferred until this month by the UNHRC as a goodwill gesture towards the government of Maithripala Sirisena who succeeded Mahinda Rajapaksa as the President of Sri Lanka in January this year.

The foreign ministry officials said Sri Lanka has five days to make its response in writing.

The report and Sri Lanka’s response would be submitted at the UNHRC session only at the end of this month.

The UNHRC was to report on its investigation on the alleged war crimes blamed on both the Rajapaksa administration and the LTTE during the final phase of the military conflict in May 2009.

The Rajapaksa administration resisted the investigation dubbing it an impingement on the country’s sovereignty.

The Sirisena government, however, engaged the UN and the larger international community in contrast to the Rajapaksa administration and sought to address some of the concerns of the Tamil minority.

The Sirisena government also took measures to redress the human rights situation in its broader policy of trying to achieve reconciliation.

The government has opted for a local mechanism to investigate rights abuses, while the Tamil groups were insisting on an international investigation.

The main Tamil party, TNA, now the official opposition in the parliament is also to attend the Geneva sessions, party sources said.

TAGS :  UNHRC ,  human rights ,  Sri Lanka ,  Geneva ,  LTTE ,  Mangala Samaraweera ,  Rajitha Denaratne ,
Disclaimer: All the comments will be moderated by the AD editorial. Abstain from posting comments that are obscene, defamatory or slanderous. Please avoid outside hyperlinks inside the comment and avoid typing all capitalized comments. Help us delete comments that do not follow these guidelines by flagging them(mouse over a comment and click the flag icon on the right side). Do use these forums to voice your opinions and create healthy discourse.