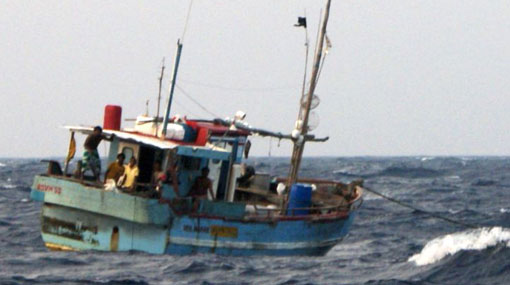 Boat Suspected to be from Lanka found abandoned in India

A fibre boat suspected to be that of Sri Lankan fishermen was found abandoned at Maniantheevu near Kodiakarai in Nagapattinam district in India, The Hindu newspaper reported today.

The boat was fitted with outbound motor engine raising suspicion that it could belong to Sri Lanka as the fishermen of the island nation use such motors in their fibre boats, police sources said.

Local fishermen noticed the fibre boat measuring around 16 feet in length and alerted the authorities. Coastal Security Group (CSG) personnel inspected the spot and seized the boat which contained fishing nets, some dry fishes and an empty fuel can on board.

The matter has been conveyed to the district administration authorities to verify whether the boat belonged to Sri Lanka. The boat had no numbers on it, CSG sources said.

The boat with no diesel was later brought to the Vedaranyam marine police station. Investigation was on, the sources added. (The Hindu)

TAGS :  India ,  kidney ,  Sri Lanka ,  boat ,
Disclaimer: All the comments will be moderated by the AD editorial. Abstain from posting comments that are obscene, defamatory or slanderous. Please avoid outside hyperlinks inside the comment and avoid typing all capitalized comments. Help us delete comments that do not follow these guidelines by flagging them(mouse over a comment and click the flag icon on the right side). Do use these forums to voice your opinions and create healthy discourse.