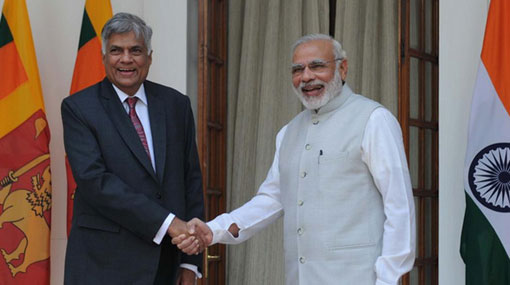 Looking at power sharing and devolution within a unity state: PM

“We are looking at how power sharing and devolution take place within the Constitution, with in a unity state,” Prime Minister Ranil Wickramasinghe says.

At a media briefing in New Delhi, Wickremesinghe said he held discussions with his PM Narendra Modi over a host of issues, such as their programme of creating one million jobs over the next five years.

“Peace as stability in the region is the key to our success. We look at further cooperation between our two countries of permanent agreement on cooperation, economic affairs, trade, investments, and also on technology which is essential for development,” he said.

“This would give us the opportunity to hold discussions in length with respect to security matters of combating terrorism and of ensuring security in the maritime areas of the Indian Ocean.

The new parliament in Sri Lanka is unique and historic. We have a government formed by the two leading parties of the Sri Lanka who have so far contested for power at least from 1956 onwards. I must thank you excellency for the help given by your government in resettling and reconstruction in the Northern and the Eastern Provinces,” he said.

He said the issue of fishermen from India and Sri Lanka who often cross into each other’s territory was discussed and it will be concluded in a time-bound manner.

He said tourism as an area of operation was also discussed. The Sri Lankan prime minister, who is on a three-day India visit, said that by the mid of next year they will be able to draw conclusions to the issues discussed.

Our relationship “can go to newer heights”, he added.

TAGS :  Prime Minister Ranil Wickramasinghe ,  Prime Minister ,  Ranil Wickramasinghe ,  India ,  Modi ,
Disclaimer: All the comments will be moderated by the AD editorial. Abstain from posting comments that are obscene, defamatory or slanderous. Please avoid outside hyperlinks inside the comment and avoid typing all capitalized comments. Help us delete comments that do not follow these guidelines by flagging them(mouse over a comment and click the flag icon on the right side). Do use these forums to voice your opinions and create healthy discourse.