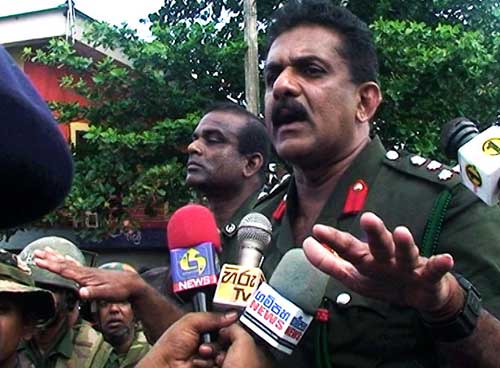 The Sri Lankan military officer who allegedly ordered troops to open fire on protesters demanding clean water in the Rathupaswala area in Weliweriya two years back, was escorted out of the airport premises under tight security after he arrived in the island today.

Brigadier Deshapriya Gunawardena arrived at the Bandaranaike International Airport in Katunayake this morning onboard a Qatar Airways flight.

He was escorted out of the airport premises under the protection of the intelligence unit, Ada Derana reporter said.

Venerable Theripehe Siri Dhamma Thero had engaged in a protest fast near the airport earlier today, demanding the arrest of the military officer upon arrival in the country.

Siri Dhamma Thero, who previously launched a fast-unto-death campaign against a glove-making factory in Weliweriya, reportedly ended his protest after Deputy Minister Ranjan Ramanayake intervened and assured that a police investigations will carried out into the incident.

Ada Derana reporter said that a large number of residents of Rathupaswala had also arrived at the airport premises upon hearing that the army officer was returning to the country today.

The army had come under intense pressure after soldiers fired on unarmed locals on August 1, 2013 in Weliweriya, killing three and injuring several others, as they protested against a factory which they say polluted their ground water.

Brigadier Gunawardena, who allegedly ordered troops to open fire at unarmed civilians, was later given a position in the Sri Lankan Embassy in Turkey, which had sparked even more controversy while the then main opposition UNP accused the ruling party of setting a bad example.

TAGS :  Weliweriya ,  Rathupaswala ,  Brigadier Deshapriya Gunawardena ,  BIA ,  Ranjan Ramanayake ,
Disclaimer: All the comments will be moderated by the AD editorial. Abstain from posting comments that are obscene, defamatory or slanderous. Please avoid outside hyperlinks inside the comment and avoid typing all capitalized comments. Help us delete comments that do not follow these guidelines by flagging them(mouse over a comment and click the flag icon on the right side). Do use these forums to voice your opinions and create healthy discourse.