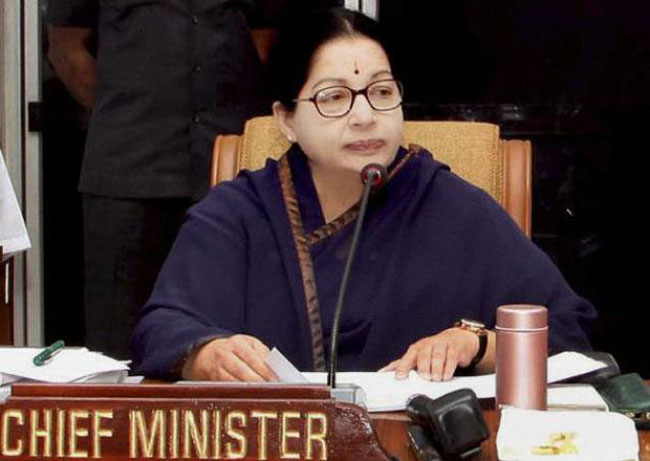 A day after India and Sri Lanka decided to renew efforts to address the vexed ethnic issue in the island nation, Tamil Nadu today stepped up pressure on the Modi government for an international probe against alleged human rights violations and war crimes committed in 2009 in Northern Sri Lanka.

In a resolution adopted in the Assembly, the Jayalalithaa government sought diplomatic efforts by India to change any possible pro-Lanka stand adopted by the US in a UN rights body.

The state government was referring to reports that US, which had earlier sought favoured international probe into the alleged human rights violations and war crimes during the peak of hostilities in Sri Lanka in 2009, had now altered its stand.

Chief Minister J Jayalalithaa told the assembly that the US had now reportedly proposed internal probe by Colombo at the United Nations Human Rights Council (UNHRC) and that it was “against natural justice.”

Jayalalithaa moved a resolution in the Tamil Nadu Assembly today in which the state government sought a more pro-active role from India.

The resolution moved by Jayalalithaa said that India itself should move a “strong resolution” at the UNHRC along with the US seeking international probe against those who had committed human rights violations and war crimes in contravention to the international rules and conventions.

“The Tamil Nadu Assembly requests the Government of India that if America takes a stand supportive of Sri Lanka (at the UNHRC), then India must take diplomatic efforts to change that,” the resolution, which was unanimously adopted by the House, said.

Jayalalithaa recalled the earlier resolutions in the Assembly seeking to stop treating Sri Lanka as a ‘friendly nation’ in the context of the alleged atrocities on ethnic Tamils. It had also demanded that India boycott a meeting of Heads of Commonwealth nations held in Sri Lanka in 2013, besides insisting that the AIADMK government would not allow Sri Lankan players and officials to participate in IPL sporting fixtures scheduled in Chennai, which was duly followed by BCCI.

TAGS :  Jayalalithaa ,  TN ,  UN ,  Sri Lanka ,  India ,  Tamil Nadu Assembly ,  human rights ,  international probe ,
Disclaimer: All the comments will be moderated by the AD editorial. Abstain from posting comments that are obscene, defamatory or slanderous. Please avoid outside hyperlinks inside the comment and avoid typing all capitalized comments. Help us delete comments that do not follow these guidelines by flagging them(mouse over a comment and click the flag icon on the right side). Do use these forums to voice your opinions and create healthy discourse.